SACRAMENTO – The California Air Resources Board today adopted a plan that demonstrates to the U.S. Environmental Protection Agency how the San Joaquin Valley air basin will attain each of four federal standards for fine particulate matter by regulatory deadlines.

Meeting standards for fine particle pollution, or PM2.5, is the San Joaquin Valley’s most critical air quality challenge. The San Joaquin Valley has the worst particulate matter pollution in California — and the worst in the nation for annual federal standards. The newly adopted 2018 Valley PM2.5 Plan is expected to result in significant improvement in air quality by 2024.

The plan was shaped by an extensive public process, including 10 public meetings on the draft strategy. The plan’s development involved close collaboration between CARB and the San Joaquin Valley Air Pollution Control District.

The result is a balanced strategy with air pollution controls on important mobile, stationary and area-wide sources that will achieve the needed reductions of PM2.5 and nitrogen oxides (NOx) emissions to reach attainment. NOx, produced in the air during combustion, is an important precursor for fine particle pollution.

“This plan is the result of a cooperative effort among air quality regulators at the local and state level, members of the community, and industry,” CARB Executive Officer Richard Corey said. “It provides a range of actions to clean the air and protect the health of everyone who lives or works in the San Joaquin Valley. Now begins the hard work: to implement the measures and secure funding for the incentives to make sure the plan delivers the required air pollution reductions.”

Particulate matter, which can be made up of soot, soil, dust and sulfate particles, comes from a variety of sources, but primarily from the burning of carbon-based fuels, such as gasoline, diesel and wood. In the San Joaquin Valley, car and truck emissions make up about half of measured airborne PM2.5, and local sources, such as wood smoke and dust, make up the other half.

Numerous scientific studies have linked exposure to airborne PM2.5 to increased severity of asthma attacks, development of chronic bronchitis, decreased lung function in children, respiratory and cardiovascular hospitalizations and even premature death in people with existing heart or lung disease. PM2.5 exposure is responsible for about 1,200 cases of premature death in the Valley each year.

Benefits from the plan are expected to be significant. For example, the city of Fresno is predicted to see a 40 percent improvement in air quality between 2013 (the base year of the plan) and 2024, when the Valley is expected to attain the 35 ug/m3 standard). The Valley Air District has committed to an aggregate reduction of 1.3 tons per day of directly emitted PM2.5 emissions and 1.9 tons per day of NOx emissions in 2024.

The plan relies on both regulations and financial incentives to accelerate emissions reductions. Securing approximately $5 billion in incentive funding by 2024 will be critical for implementing the plan. CARB is committed to working with the air district and stakeholders to help secure a steady stream of needed funding.

Measures for reducing emissions include:

Taken together, reductions from CARB and air district measures, implemented for the 2018 PM2.5 Plan, will provide significant air quality benefits. 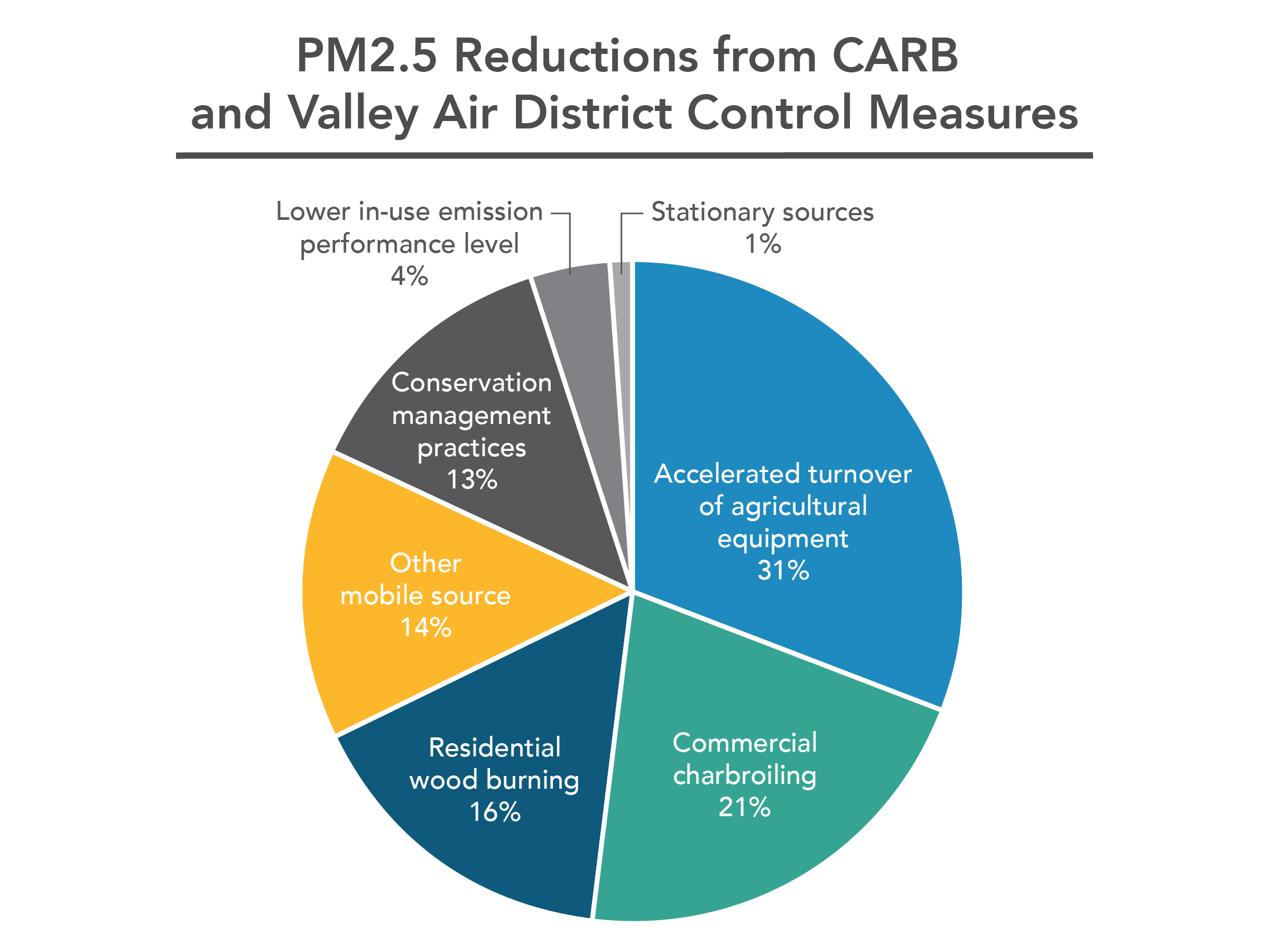