The State of California has partnered with Carbon Mapper (a new non-profit), Planet, NASA's Jet Propulsion Laboratory (NASA JPL) , the University of Arizona, Arizona State University (ASU), The Rocky Mountain Institute (RMI), and several philanthropic entities, including the High Tide Foundation and Bloomberg Philanthropies, and other donors on the deployment of satellites using ground-breaking hyperspectral technology. The technology can pinpoint and quantify leaks and other emissions of methane and carbon dioxide. This effort builds upon a successful partnership between CARB, the California Energy Commission, and NASA JPL on a statewide study to identify large methane sources across California. That study, called the California Methane Survey, used the same technology envisioned for the satellites but mounted on airplanes to 'see' methane emissions. The new collaboration will initially be managed by a nonprofit organization called "Carbon Mapper" (https://carbonmapper.org/) which has a long-term public good mission to deliver global methane and carbon dioxide data sets from the constellation. Carbon Mapper is on track to launch two satellites in 2023, enabling quicker detection, quantification, and visualization of high emitting methane and CO2 emission sources. The ultimate goal of the partnership is to launch a constellation of satellites that can provide regular, complete, precise, and timely measurement of methane and CO2 source level emissions as well as over 25 other environmental indicators. The California Air Resources Board is committed to reducing greenhouse gas emissions, with successful regulatory programs targeting methane and CO2 and will continue to explore how best to use this new information to mitigate emissions even further. CARB will continue to work with other jurisdictions to successfully reduce methane emissions through policy and new data sources such as satellite based observations.
More about this program

Methane Source Finder (MSF) is a data system developed by NASA's Jet Propulsion Laboratory which streamlines the visualization of airborne methane remote sensing data products. The MSF portal allows public access to the data collected during these airborne surveys, and view the surrounding source. This California edition showcases data collected within California borders that were funded by California state agencies. The MSF is envisioned to be the repository for the publicly available data from the satellites. CARB is also making changes to allow operational use of the application.

The satellite partnership will be a game-changer in mitigating methane worldwide. Carbon Mapper, in collaboration with its public and private partners, is developing the satellite constellation in phases. Launch of two demonstration satellites will take place in 2023, and expansion to a full constellation, with tens of satellites, is envisioned for 2025. 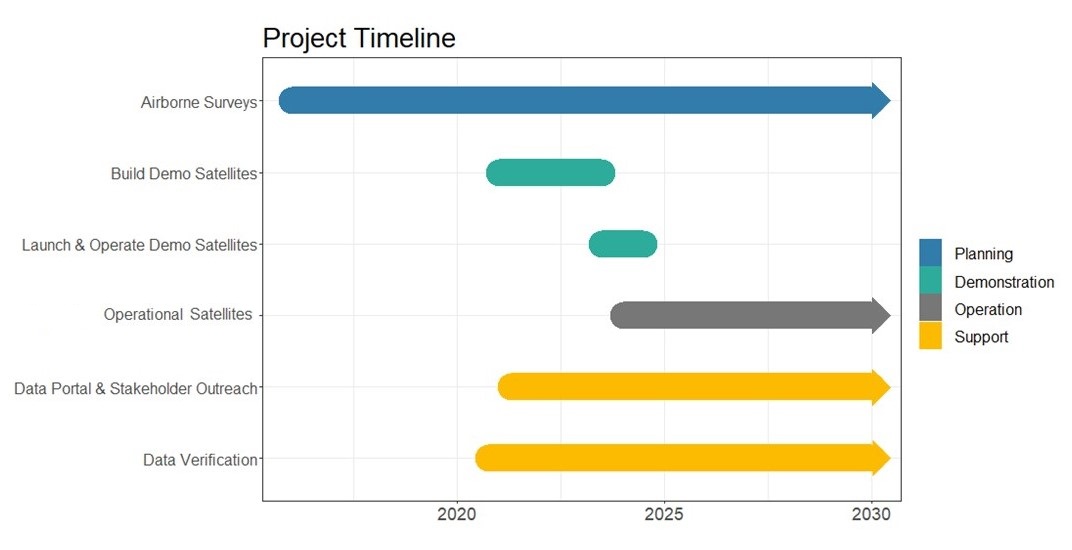 Airborne surveys, where imaging spectrometers have been placed in planes, have informed the need for persistent observations of methane plumes both in the US and specifically in California:

CARB staff and the Carbon Mapper team continue to work on other elements of the science and programming to improve the quality of the data and reduce the time it takes to get results and collaborate with other jurisdictions beyond California to use the data. This includes: