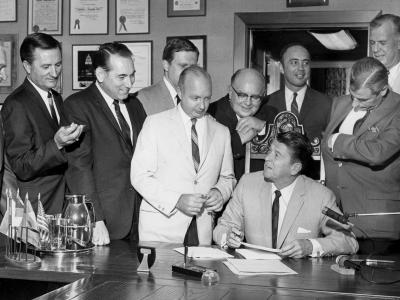 On August 30, 1967, a diverse group of California leaders came together to unify statewide efforts to address severe air pollution. Governor Ronald Reagan approved the Mulford-Carrell Air Resources Act to create the State Air Resources Board, committing California to a unified, statewide approach to aggressively address the serious issue of air pollution in the state.

In the current decade, California solidified its position as a world leader on climate change, entering into climate agreements with several nations and linking cap-and-trade programs with Quebec. Its broad range of programs to reduce greenhouse gases addresses every major sector of the economy including a Zero Emission Vehicle mandate that will clean up the transportation sector and put close to 1.5 million plug-in or hydrogen fuel cell vehicles on the roads by 2025. Thanks to the cap-and-trade program, which reduces carbon emissions from electricity generation and large-scale industries, billions of dollars have been invested to reduce greenhouse gases in cities and towns throughout California, with an emphasis on disadvantaged communities.