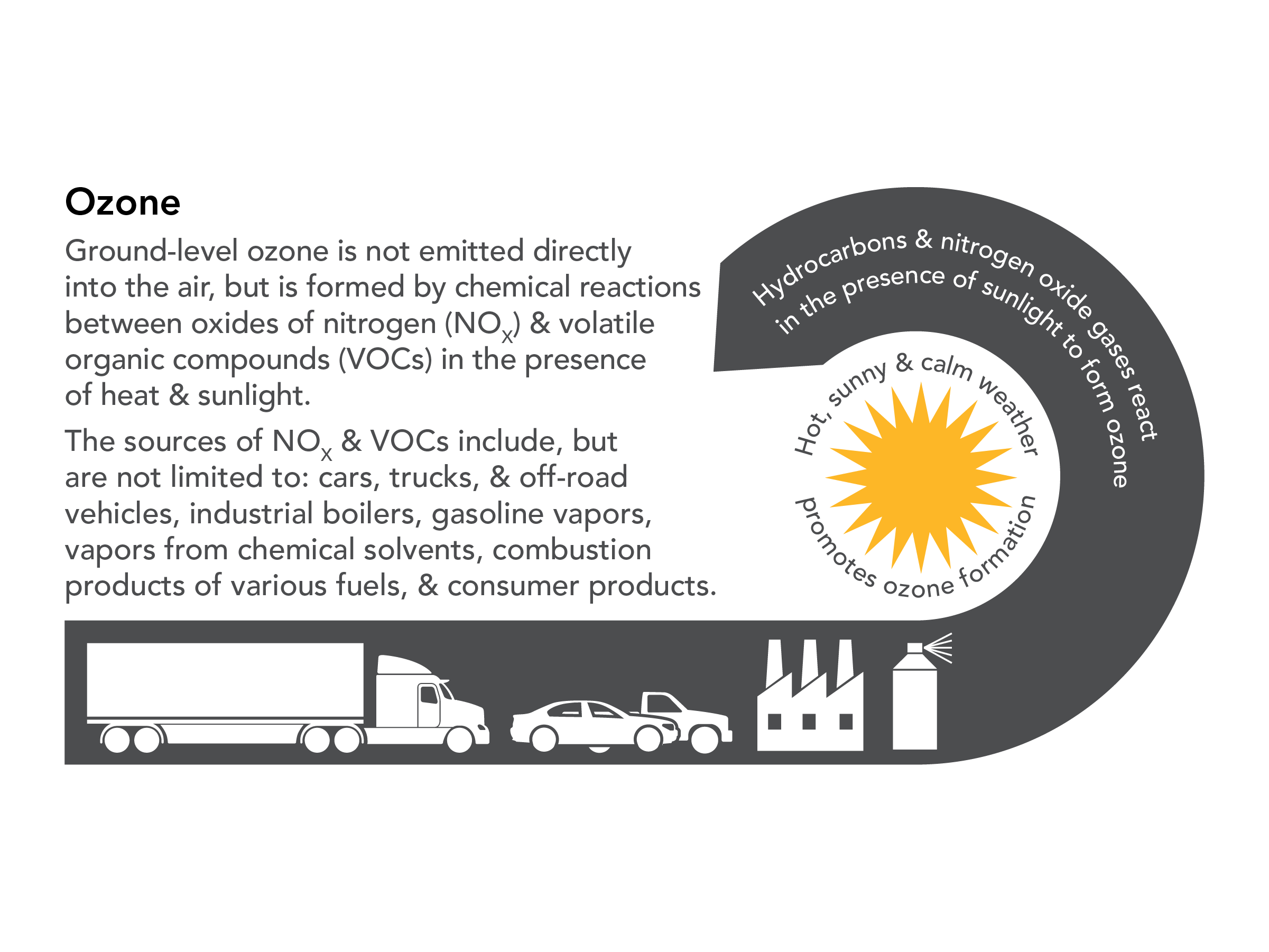 Ozone, an important component of smog, is a highly reactive and unstable gas capable of damaging living cells, such as those in human lungs. This pollutant forms in the atmosphere through complex reactions between chemicals directly emitted from vehicles, industrial plants, consumer products and many other sources. Ozone is a powerful oxidant – its actions can be compared to household bleach, which can kill living cells (such as germs or human skin cells) upon contact. It forms in greater quantities on hot, sunny, calm days. In metropolitan areas of California, ozone concentrations frequently exceed existing health-protective standards in the summertime.

How is Ozone Created?

Ozone is formed in the atmosphere through chemical reactions between pollutants emitted from vehicles, factories and other industrial sources, fossil fuels, combustion, consumer products, evaporation of paints, and many other sources. Hydrocarbons and nitrogen oxide gases react in the presence of sunlight to form ozone. Hot, sunny, and calm weather promotes ozone formation. Ozone has a very characteristic pungent odor, sometimes described as like chlorine bleach, and it can sometimes be detected after lightning strikes or during electrical discharges. Individual humans vary in their ability to smell ozone; some people can smell it at levels as low as 0.05 ppm.

What is the Difference Between Ground-Level and Stratospheric Ozone?

The ozone that CARB regulates as an air pollutant is produced close to the ground level, where people live, exercise and breathe. A layer of ozone high up in the atmosphere is called stratospheric ozone. This layer, far away from where people live, reduces the amount of ultraviolet light entering the earth’s atmosphere. Without the protection of the stratospheric ozone layer, plant and animal life would be seriously harmed.

Is Ozone a Problem Indoors?

Ozone reacts with surfaces as it penetrates the indoor environment, usually resulting in lower levels indoors than outdoors. However, levels of ozone indoors can approach outdoor levels when windows or doors are open. Moreover, equipment such as photocopiers, laser printers and certain air purifiers can emit ozone indoors as well. Air purifiers that purposely emit ozone, called ozone generators, should not be used in occupied spaces as they can emit unsafe levels of ozone. Once inside, ozone can cause harmful health effects and damage materials, depending on its concentration.

The California Air Resources Board and the California Department of Health Services advise the public not to use ozone generators in homes or offices. Hazardous ozone generators are often marketed for the purposes of aiding allergy sufferers, but actually emit harmful ozone gas that can cause asthma or other respiratory symptoms.

Why Does CARB and the U.S. EPA Focus on Ozone?

Air quality regulators are concerned about ozone pollution because of its effects on public health and the environment. Ozone can damage the tissues of the respiratory tract, causing inflammation and irritation, and result in symptoms such as coughing, chest tightness and worsening of asthma symptoms. In addition, ozone causes substantial damage to crops, forests and native plants. Ozone can also damage materials such as rubber and plastics.