Why is the analysis simplistic?

The analysis is a straightforward, community-friendly comparison of truck and train emissions for general use, regardless of a specific location within the State.  More detailed truck and locomotive data specific to a certain region could better reflect the emissions for that particular region or route, but the analysis would no longer apply broadly to all California communities.

Why does the analysis focus on particulate matter 2.5 micrometers and smaller (PM2.5) and oxides of nitrogen (NOX)?

Communities adjacent to railyards, ports, and warehouses typically experience heavy freight traffic and therefore experience disproportionate burdens from exposure to air pollutants, such as PM2.5 and NOX.  PM2.5 is associated with premature mortality, increased hospital admissions for heart or lung causes, acute and chronic bronchitis, asthma attacks, emergency room visits, respiratory symptoms, restricted activity days, and reduced lung function growth in children.  Freight PM2.5 emissions also include diesel particulate matter, a known toxic air contaminant.  As a precursor to smog, NOX can cause or worsen numerous respiratory and other health ailments, and is also associated with premature death.  All combustion engines produce PM2.5 and NOX, and although technology has advanced over the years, California must still do more to reduce PM2.5 and NOX emissions – PM2.5, which includes diesel particulate matter and NOX, which leads to Ozone formation.

Does the analysis compare greenhouse gas (GHG) emissions between trucks and trains? 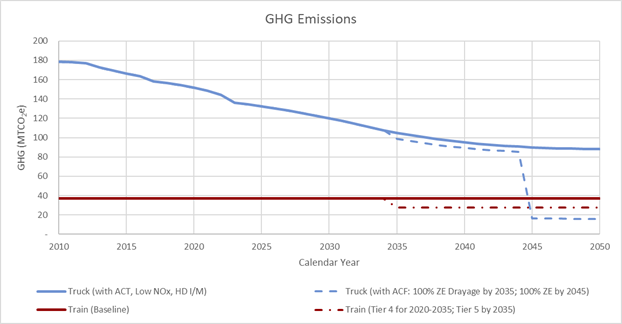 Why does the analysis focus on exhaust emissions?

Which CARB models and tools did the analysis use?

Relevant data from the inventories shown below are included in Appendix A and Appendix B of the Draft Truck vs. Train Methodology document.

The analysis also references other sources; please see Section D of the draft methodology document for the complete list of referenced sources.

Will CARB update the analysis?

The analysis is a snapshot in time prepared in 2020.  It uses tools, such as emissions inventories, which evolve over time as new data are gathered, new technologies become available, and new regulations are implemented.  CARB may update the analysis as new information becomes available.  Even if newer inventories project a different year in which diesel trains become cleaner than trucks, both modes of transport will need to move to zero emissions operation, consistent with the Governor’s Executive Order N-79-20.

Why is the analysis limited to 300 miles?

The analysis uses 300 miles to represent an average trip from the Port of Los Angeles and the Port of Long Beach to a destination within the Central Valley.  Drayage truck, long haul truck, and train emissions in the analysis scale consistently with distance, therefore changing the distance to represent a different destination will not affect the relative difference between truck and train emissions.

The analysis assumes 130 double-stacked railcars and 4 locomotives per train (San Pedro Bay Ports Emissions Inventory Methodology Report Version 1).  It is possible that a train could pull the same number of railcars with less locomotives; however, each locomotive would then emit more, due to transporting a heavier load.  Because each locomotive emits more when there are fewer locomotives, it is mostly the weight of the removed locomotive that affects total emissions.  For example, lowering the number of locomotives from 4 to 3 reduces train emissions by only approximately 2 percent in all graphics associated with the Draft Truck vs. Train Emissions Analysis.

What is CARB’s position on a mode shift from train to truck?

CARB projects California freight will continue growing in the future.  In order to reduce emissions, all modes will need to move towards zero emissions, as outlined in the Governor’s Executive Order N-79-20, to support California’s thriving economy and minimize community health risk.  CARB does not favor one technology or mode of transport over another; however, CARB has made substantial progress toward reducing truck emissions and has mechanisms in place to move towards an even cleaner truck fleet.  Conversely, the 2021 CARB locomotive emissions inventory projects tier 4 locomotives will account for only about 6 percent of freight line haul activity in California in 2021.  The train population in California also needs to transition to cleaner technologies, such as Tier 4 diesel and zero emission locomotives, to reduce emissions in the State.