This paper provides a comparison of energy usage from battery electric trucks and buses when compared to energy usage from similar conventional diesel vehicles operated in the same duty cycle. Several years ago, the California Air Resources Board (CARB) established an estimated energy efficiency ratio (EER) of 2.7 for battery electric trucks compared to diesel trucks based on limited data from 2007. The EER for buses was set at 4.2 for buses based on test data on several buses that was more recent.

The EER is used to compare expected energy use and associated greenhouse gas emissions for different vehicle technologies and fuel types. As more zero emission trucks and buses have come to market additional information has become available for comparison.

We found that the combined data from different studies show a statistically significant correlation between the EER and average driving speed for battery electric trucks and buses when compared to equivalent conventional diesel trucks and buses for a wide range of vehicle types and weight classes.  Most fuel economy comparisons for electricity or other fuel types are made on a miles per diesel gallon equivalent (mpdge) basis. The primary data sources used in this analysis was from three studies that measured diesel fuel and electricity use for 40 foot transit buses, Class 8 drayage trucks and parcel delivery trucks.  These studies were performed with comparable vehicles and loads on the same test cycles. This ensures that the comparisons are as “apples- to-apples” as possible. Although fuel economy varies for different vehicles and duty cycles, we found that the EER has a statistically significant correlation (P-value <.05 at 95 percent confidence interval) to test cycle average speed as shown in Figure 1. Also displayed on the bottom left of the figure is the average speed of several vehicle categories where electric vehicles are commercially available or are being demonstrated. 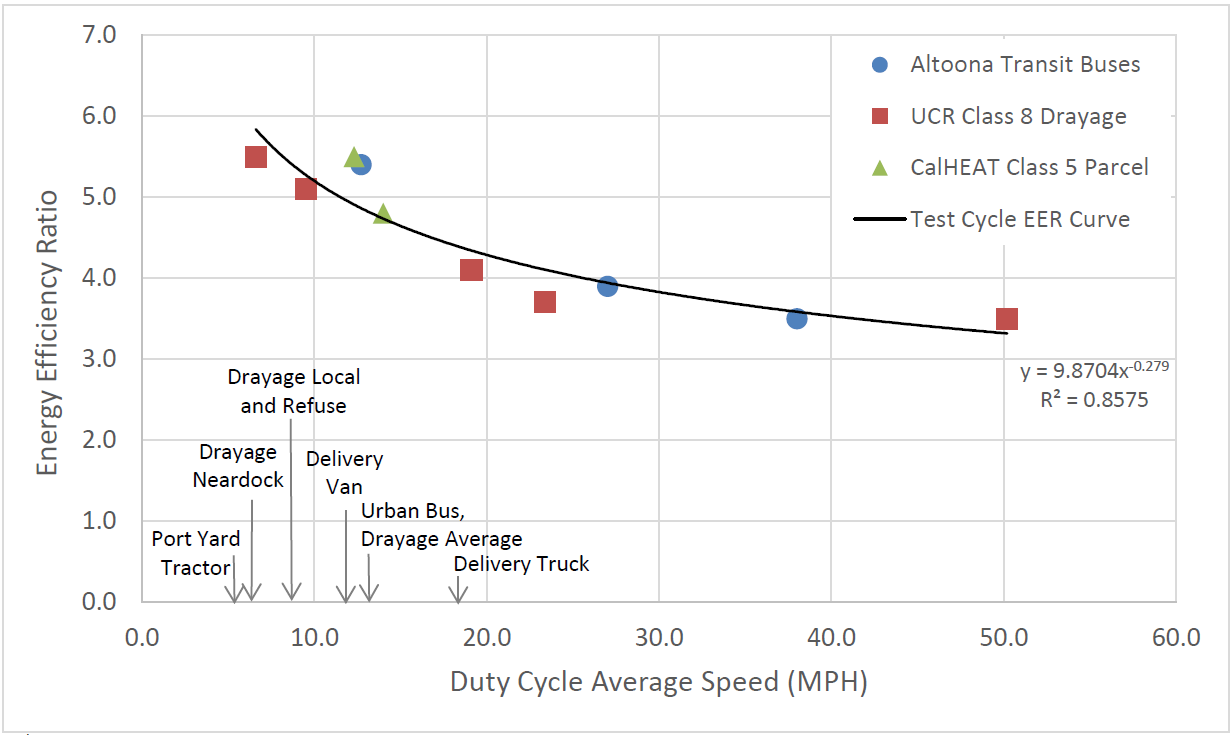 We also compared the results to available in-use data for additional vehicle types. The in-use data is from an extensive one year study of a transit bus fleet operation, data from an airport shuttle business using Class 3 passenger vans, a report of in-use Class 3 and 4 delivery vans, and a report on Class 8 yard trucks.  By its nature, in-use data has more variables and is not as robust as data collected on the same test cycle; however, the in-use data from these additional vehicles showed that the efficiency gains were largely consistent in-use as the test data.

To put these results in context, the average daily speed for near dock drayage trucks, delivery vans, urban buses, and yard tractors are commonly below 13 miles per hour (mph). For a typical delivery van or urban bus the EER is about 5 and can be higher than 6 for yard trucks and trash trucks that tend to operate at the lowest speeds.

Several other vehicle categories representing local vehicle operation average less than 13 mph. In the next decade, battery electric trucks and buses are more likely to be placed in service in these slower speed operations because of battery range limitations, battery costs, and the expectation that the early battery electric truck and bus market is more likely to be supported by centrally operated and maintained fleets that are expected to primarily be charged in the yard.

These results show that the expected efficiency gains from electrification of trucks and buses are better than previously estimated, especially for low speed duty cycles. The resulting greenhouse gas emissions benefits and fuel saving would also be higher than previously estimated. The EER is also used to determine how many credits an electric vehicle owner can receive for using electricity as a motor vehicle fuel. Potential updates to the Low Carbon Fuel Standard program would result in higher credits per kWh used and would lower the total cost of ownership of a given electric vehicle. The EER curve also allows the end user to estimate the electricity usage for a battery electric vehicle that would replace a conventional vehicle operated in the same conditions if the average speed and fuel economy of the conventional vehicle is known. When doing emissions analysis or total cost of ownership analysis, charger and battery system inefficiencies must also be taken into consideration as discussed in Appendix 1.

This paper is organized as follows:

Section 1 describes the information that was used from individual studies where conventional diesel vehicles and equivalent battery electric vehicles were tested for vehicle energy used.

Section 2 describes available in-use data that was used to compare to the test cycle results.