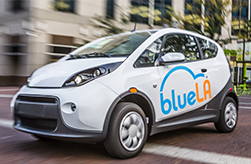 What:  Mayor Eric Garcetti announces the launch of a demonstration station that will kick start the “BlueLA Electric Car Sharing Program” - the nation’s largest program for disadvantaged communities funded in part by a grant from the California Climate Investments in partnership with LA Department of Transportation and with private funding from Bolloré Blue Solutions, the program operator.

Media Parking: will be reserved on 7th Street between Bonnie Brae Street and Westlake Avenue.

BACKGROUND
The “BlueLA Electric Car Sharing Program” will launch its demonstration station to help kick start a pilot project that will deploy 100-electric cars and 200 EV charging stations starting this year. The electric car sharing service is the largest in the nation for disadvantaged communities and will serve portions of Westlake, Pico Union, Koreatown, Echo Park, and Downtown Los Angeles.  The demonstration station will be used for community outreach, drive and ride events, and for raising awareness about electric vehicles. The project was funded in part by a $1.7 million grant through California Climate Investments, a statewide program that puts billions of cap-and-trade dollars to work reducing greenhouse gas emissions, strengthening the economy and improving public health – particularly in disadvantaged communities. Majority funding is provided by Blue Solutions, a division of the Bolloré Group, which will invest over 10 million in Los Angeles as part of this program.