SACRAMENTO – A new California Air Resources Board (CARB) analysis of air quality data collected during the deadly Camp Fire sheds new light on exactly what was in the thick smoke that blanketed much of Northern California for two weeks in November 2018. The document, published today, shows smoke produced from the Camp Fire exposed Californians to dangerous levels of particulate matter and contained concerning levels of toxic metal contaminants, including lead, which spiked for about 24 hours.

“This report makes it clear that wildfire smoke poses a real health threat not only to people living and working near these fires, but to anyone affected by the smoke as it travels across California and beyond,” said CARB Executive Officer Richard Corey. “After an extremely dry winter, California is facing the potential for another severe wildfire season in 2021. So it’s more important than ever that we all take action to protect ourselves – and our loved ones – from smoke.

At least 85 people died in 2018 as the deadliest wildfire in California history burned more than 150,000 acres in Butte County, destroying most of the town of Paradise and nearly 19,000 buildings.

CARB staff compared air quality data from the Camp Fire with three other large wildfires in 2018 that burned mostly vegetation. The primary goal of this analysis was to better understand the air quality differences that might occur between vegetation-based wildfires and those that burn more structures.

When structures burn, they can produce a range of harmful and toxic substances. CARB’s analysis shows this was indeed the case during the Camp Fire, which burned for 2 ½ weeks. During that period, elevated levels of lead and zinc were detected, as well as calcium, iron and manganese. Smoke containing these metals traveled more than 150 miles, and was detected in the air as far away as San Jose and Modesto.

The highest concentrations of lead were detected in Chico on Nov. 10, 2018. According to CARB’s analysis, lead concentrations in Chico reached levels 50 times above the average for that air monitoring site. While these extreme levels only lasted for about a day, they are still concerning, since lead is considered a toxic air contaminant and any increased exposure can be harmful. Lead exposure has been linked to high blood pressure, reproductive effects and cancer in adults. Infants and young children are especially sensitive to even low levels of lead that are known to cause behavioral changes and learning deficits. 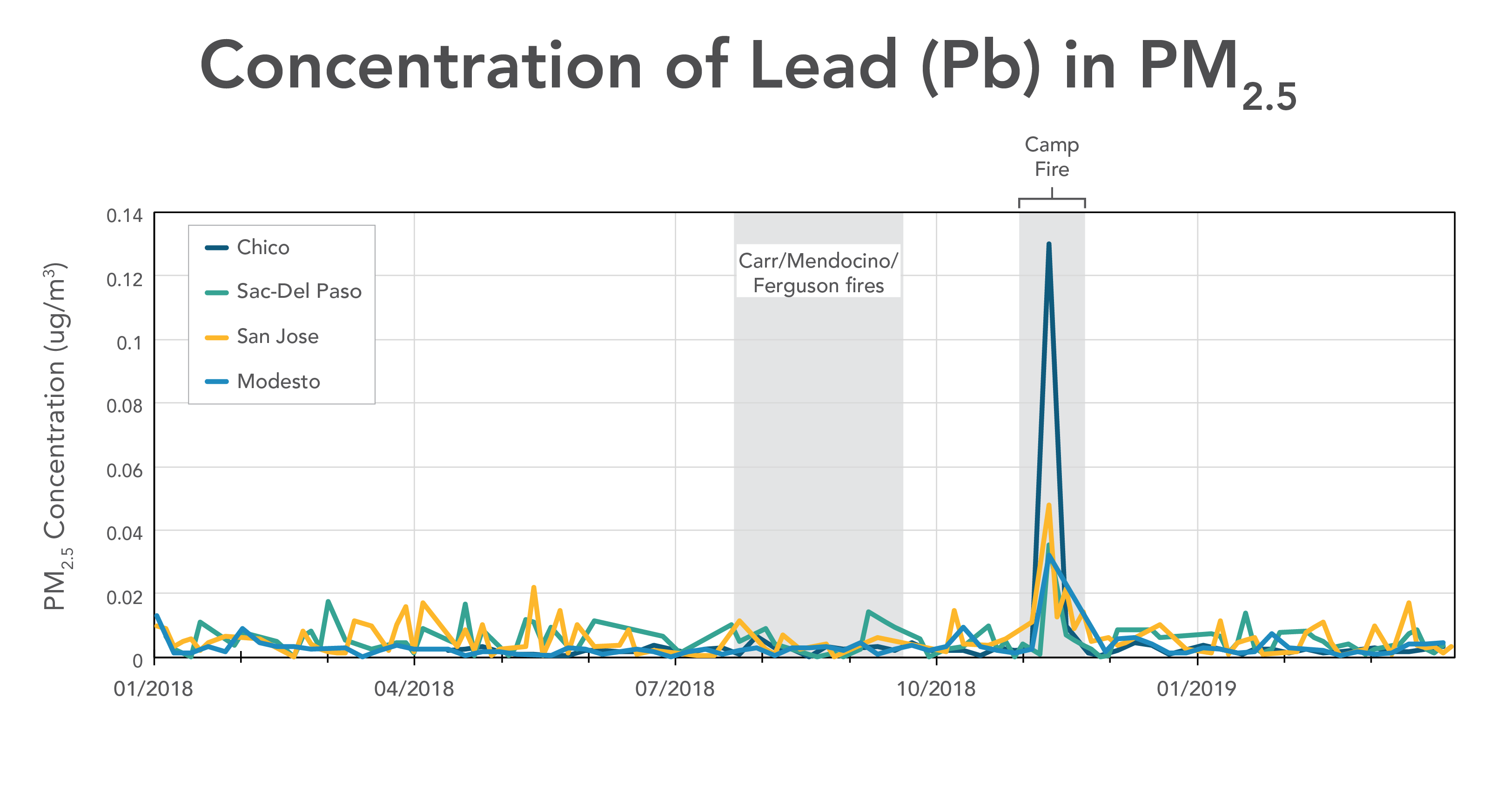 Particulate matter (PM) is typically the biggest health concern from wildfire smoke. Particles from smoke tend to be very small (with diameters of 2.5 micrometers [μm] and smaller), and can be inhaled into the deepest recesses of the lungs. This size of particulate matter is often referred to as PM2.5. During the 2018 Camp Fire, between Nov. 8 and Nov. 22, maximum PM2.5 levels increased across much of California by more than 300 percent compared to average levels seen during the same time period from 2010 to 2017. 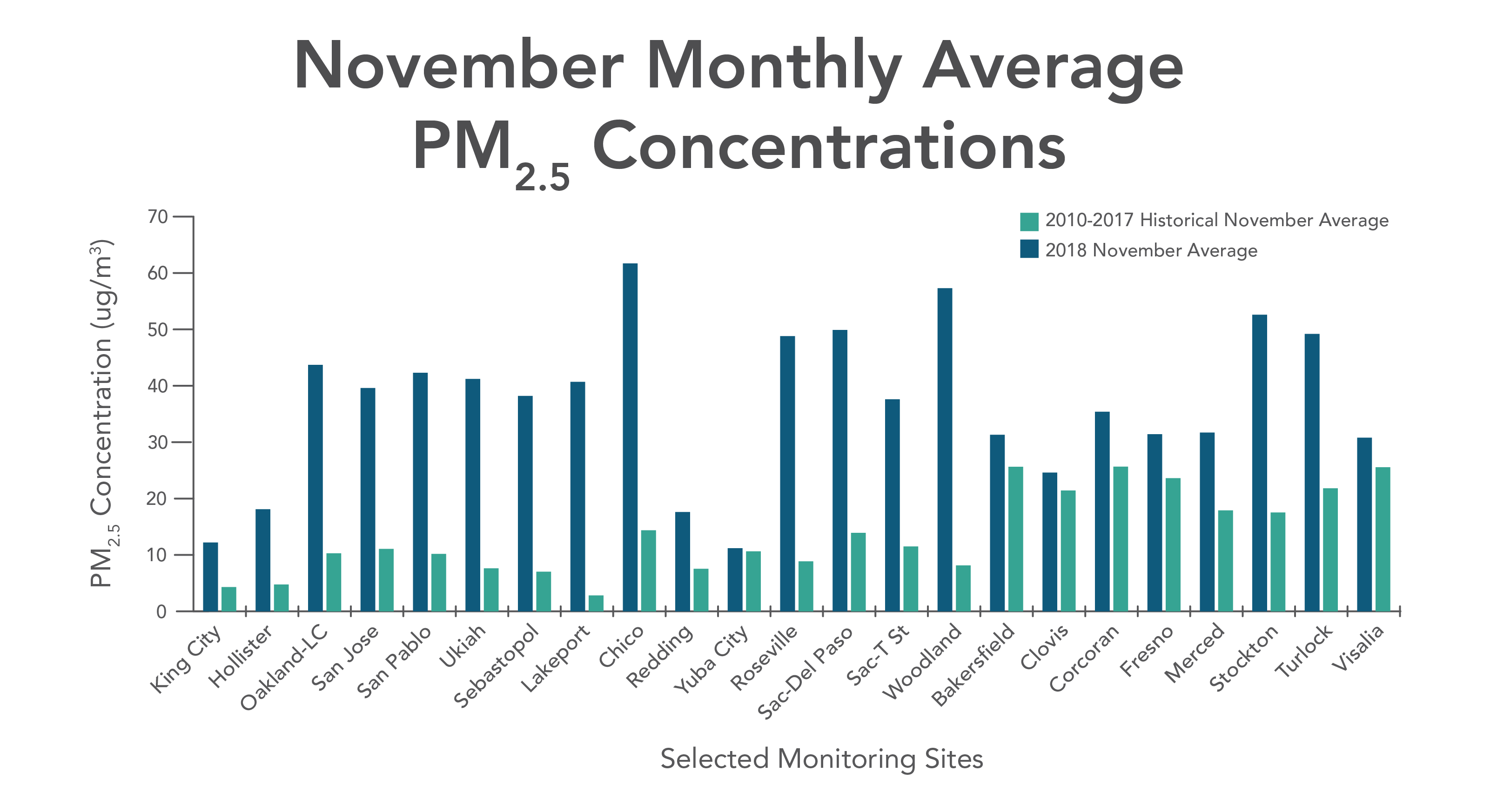 In general, short-term exposure (days or weeks) to PM2.5 and wildfire smoke has been strongly linked to increasing severity of asthma; other respiratory disease, such as chronic obstructive pulmonary disease (COPD); inflammation or infections, including bronchitis and pneumonia; emergency department visits; and hospital admissions.

If you have been exposed to wildfire smoke and have concerns about your health, the best thing to do is speak to your doctor. To learn more about the health impacts of wildfire smoke, as well as specific steps you can take now to be Smoke Ready this wildfire season, visit Protecting Yourself from Wildfire Smoke.

CARB is funding several studies that will provide additional insight into the health impacts of wildfire smoke. CARB-funded investigators are currently studying the associations of short-term exposure to wildfire PM2.5 with loss of work days and increases in asthma attacks. CARB is also funding a long-term health effects study in which primates were naturally exposed during infancy to wildfires and continue to be monitored throughout adulthood.

CARB is expanding its air monitoring to give the public more detailed information about smoke impacts during wildfires. In populated areas where there are no permanent air monitoring stations, CARB staff deploys portable equipment, in coordination with local air districts, when there is a fire to collect data on particulate matter and some toxic air contaminants. Over the past three years, CARB has doubled its equipment inventory and now has more than 100 high quality, portable air monitors to deploy across California during wildfire season.