SACRAMENTO - Today the California Air Resources Board announced the winners of the 2012 Haagen-Smit Clean Air Awards, the premier state-government award recognizing individuals who have made outstanding contributions to improving air quality.

"Each of these three women has made a lasting contribution to the health and well-being of all Californians,” said ARB Chairman Mary D. Nichols. “ Their professional accomplishments span the fields of scientific research, technology development, and policy innovation. Throughout their careers, our honorees have demonstrated a sustained commitment to protecting California's air. 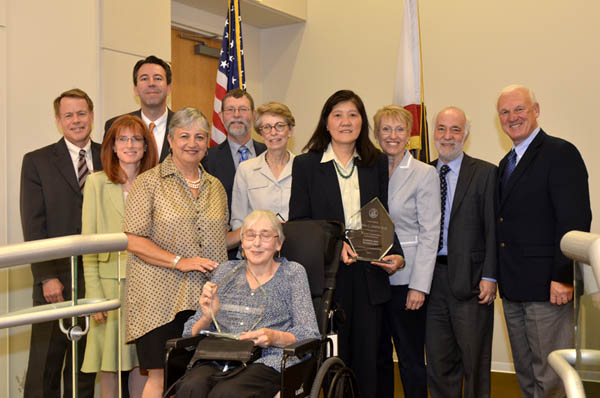 Dr. Janet Arey – for her work in the area of air pollution research: Dr. Janet Arey has been teaching and conducting research into atmospheric chemistry for over 30 years. A professor in the Department of Environmental Sciences and the Interdepartmental Program in Environmental Toxicology at University of California, Riverside, she joined the Air Pollution Research Center at UC Riverside as an Assistant Research Chemist in 1982.  Dr. Arey’s area of expertise is the atmospheric chemistry of volatile and semi-volatile organic compounds, especially polycyclic aromatic hydrocarbons, an area in which she is one of the world’s leading authorities with nearly 100 journal publications on this topic alone (out of almost two hundred total).  She is a member of the World Health Organization’s Task Group for Environmental Health Criteria, and participates in a working group for the International Agency for Research on Cancer evaluating carcinogenic risks to humans.  For the last two decades Dr. Arey has been a UC Riverside graduate advisor to students who have successfully completed their degrees and are employed in pharmaceutical firms and regulatory agencies throughout the United States.

Dr. Judy Chow – for her work in the area of science and technology: Dr. Chow has 35 years of experience and leadership as a research scientist.  She is the Nazir and Mary Ansari Chair in Entrepreneurialism and Science and Research Professor in the Division of Atmospheric Sciences at the Desert Research Institute in Reno, Nevada.  She joined DRI in 1985, after she received her Doctor of Science degree from Harvard University.  Dr. Chow is internationally known for her expertise in characterizing and quantifying complex atmospheric particles, establishing analytical techniques and instruments for monitoring and analyzing the chemical composition of ambient PM2.5 and PM10, and for her communication and knowledge transfer in PM monitoring, analysis, modeling, and controls to state, local, and international applications.  She has published more than 320 peer-reviewed articles and acted as editor and reviewer for numerous technical journals.  Dr. Chow is founder and leader of the Environmental Analysis Facility of the Desert Research Institute.  The facility assesses chemical and physical characteristics of airborne particles.  She has designed measurement strategies for, and participated in, major health and exposure studies in Mexico, China, and the United States.  Dr. Chow has been appointed to: the National Research Council's Board of Environmental Studies and Toxicology, the Department of Energy's Atmospheric Radiation Measurement Science Board, and the U.S. EPA Ambient Air Monitoring and Methods Subcommittee of the Clean Air Scientific Advisory Committee.

Ms. Jananne Sharpless – for her work in the area of environmental policy: Ms. Sharpless has worked in the public policy arena for 35 years.  She served as both Cabinet Secretary for the Environment - predecessor agency to Cal EPA - and Chair of the California Air Resources Board (ARB) between 1985 and 1991, and after the California Environmental Protection Agency was established, she continued her chairmanship of ARB until the end of 1993, and served as a California Energy Commissioner between 1994 and 1999.  Ms. Sharpless currently operates a consulting firm, and is on the Board of Directors of the Western Electricity Coordinating Council. She has provided historic leadership on clean air and clean energy issues in California laying the groundwork for transitioning California to the next generation of clean alternative fuels and technologies.  During her tenure at ARB, Ms. Sharpless was instrumental in the adoption of standards for cleaner-burning gasoline and low and zero-emission vehicles.  In 1990, she presided over the adoption of the first Zero Emission Vehicle (ZEV) Mandate that required ZEVs be sold in California.  For the past 18 years, she has served as Chair of the Health Effects Task Force of Breathe California as well as on the Advisory Board to UC Davis’s Institute of Transportation Studies.  She served on the U.S. Department of Energy Advisory Board, Sacramento Transportation and Air Quality Collaborative, and the California League of Conservation Voters.  Ms. Sharpless has received notable awards for her efforts: the Clean Air Award and the Phillip S. Tow Government Award from the American Lung Association; and the Clean Air Award from the South Coast Air Quality Management District; and, the Richard Beatty Mellon Award from the Air and Waste Management Association.

The Haagen-Smit Clean Air Award was named after Dr. Arie Haagen-Smit, ARB’s first chairman, known to many as the “father” of air pollution control.  His research concluded that most of California's smog resulted from photochemistry –the reaction of sunlight with industrial and motor vehicle exhaust to create ozone.  This breakthrough became the foundation upon which today's air pollution standards are based.  The Haagen-Smit award winners continue his legacy of advancing air pollution science and forging the way for effective control programs.

For a list of all past award winners, visit:
https://www.arb.ca.gov/research/hsawards/hscleanairawards2001-2010.pdf

To learn more about the award or to make a nomination see:
https://www.arb.ca.gov/research/hsawards/hsawards.htm