SACRAMENTO – The California Air Resources Board today released greenhouse gas (GHG) inventory data for 2019, showing further reductions below the AB 32 emissions reduction target. That target, a return to 1990 GHG levels, was achieved by the state four years ahead of schedule in 2016.

“This inventory is good news but much larger reductions are needed to reach the ambitious 2030 target — an additional 40 percent reduction below the original 2020 limit,” said CARB Chair Liane M. Randolph. “We are now once again witnessing massive wildfires and recurring heat waves while large parts of our state are suffering from extreme drought. This is a clear call to redouble our efforts to protect those communities already hard hit by pollution and climate change, and to move with all possible speed to achieve carbon neutrality by midcentury as quickly as possible.”

The 2019 GHG Inventory is further evidence that California’s leadership in setting ambitious climate targets, paired with enforceable and comprehensive actions, is delivering real reductions. Some examples: 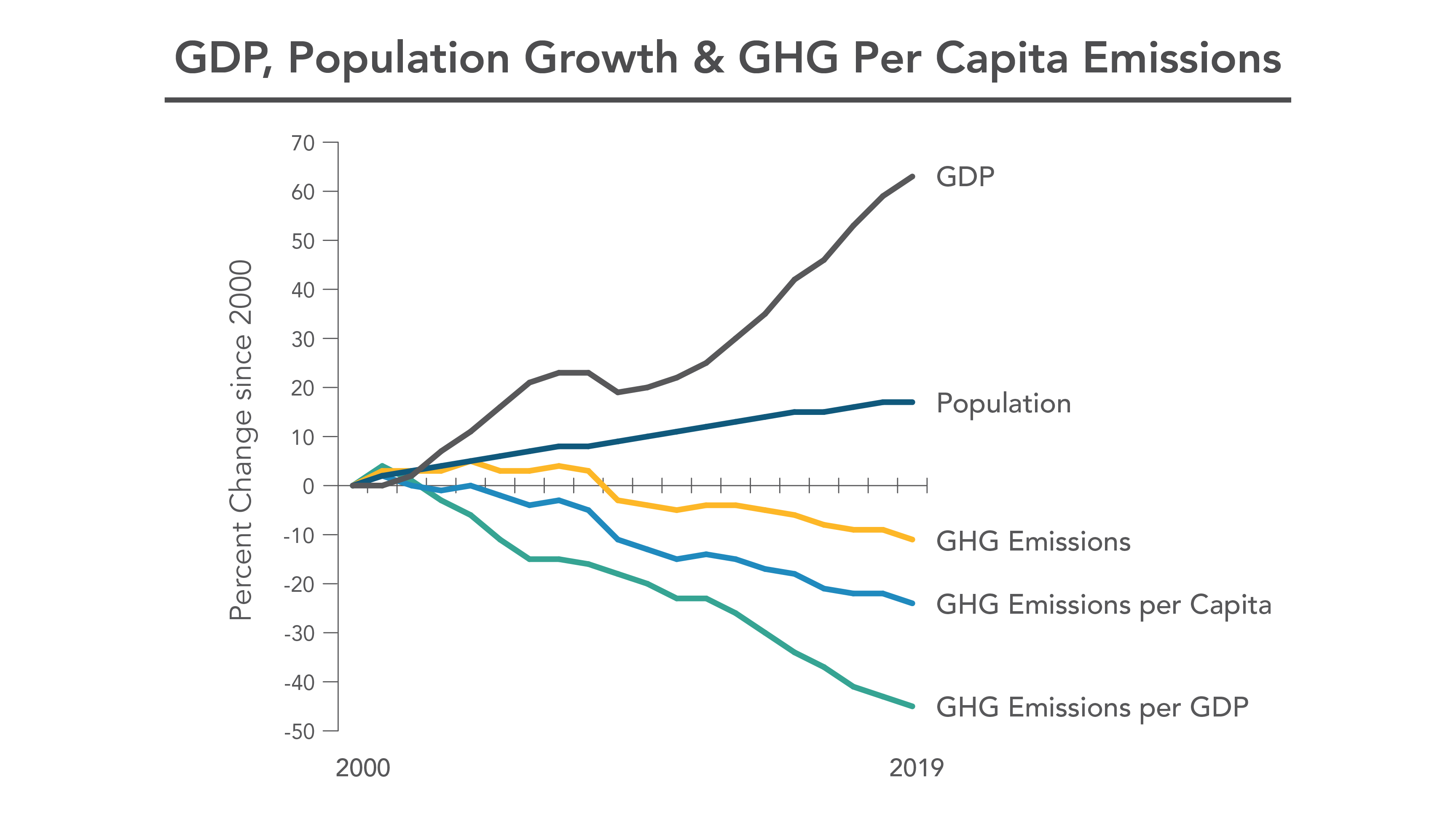 Transportation emissions declined again in 2019, in part because of a 61 percent increase in the use of renewable diesel fuel under the Low Carbon Fuel Standard. As a result, biodiesel and renewable diesel made up 27 percent of all on-road diesel sold in the state, displacing nearly 900 million gallons of fossil fuel-derived diesel. That constitutes a reduction of 17 million metric tons of carbon dioxide in 2019. 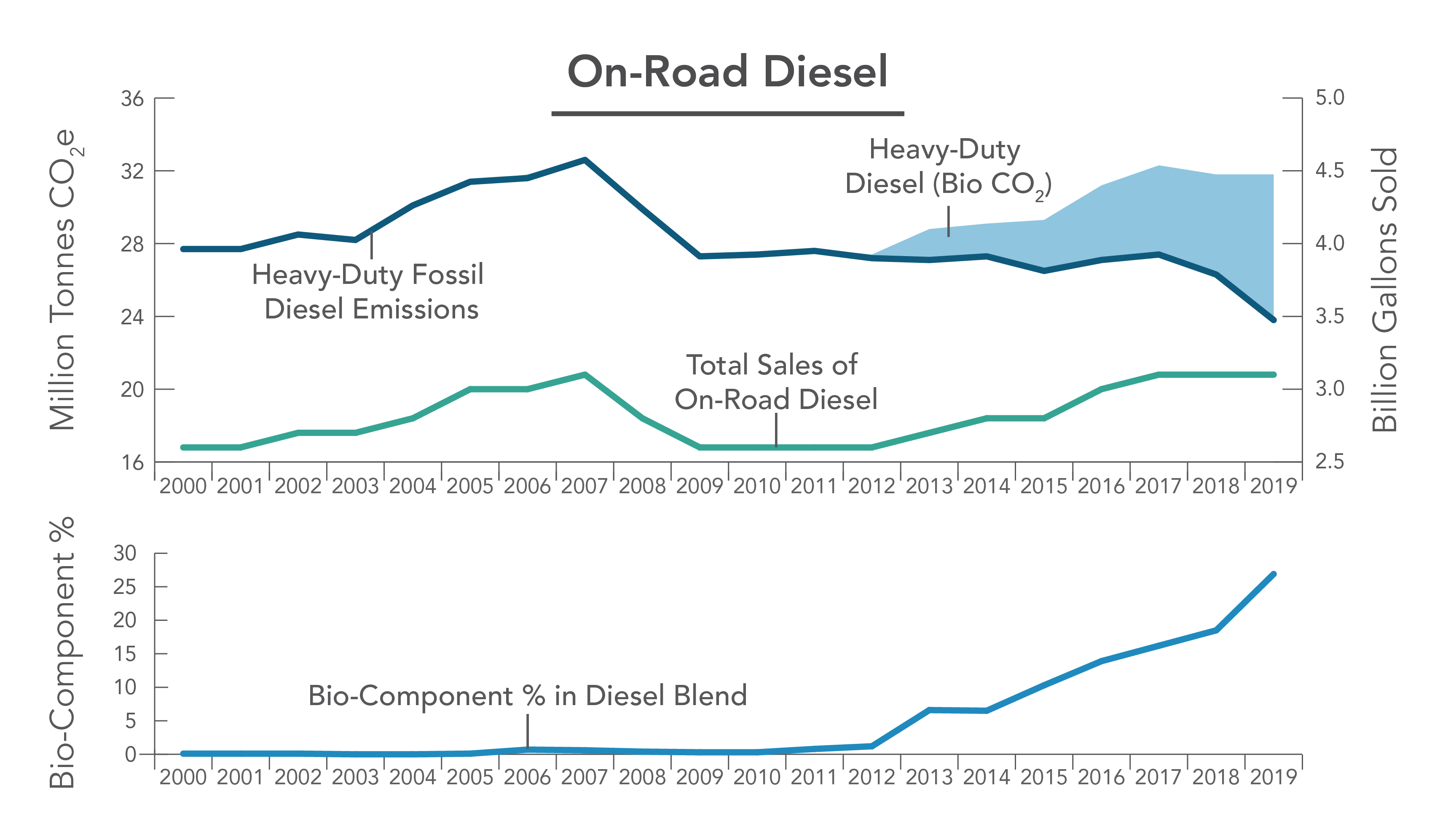 While progress around deployment of cleaner vehicle technology and fuels was significant, increases in per capita vehicle miles travelled (VMT) in passenger cars continued to rise slightly.

Some other details from the 2019 GHG Inventory: 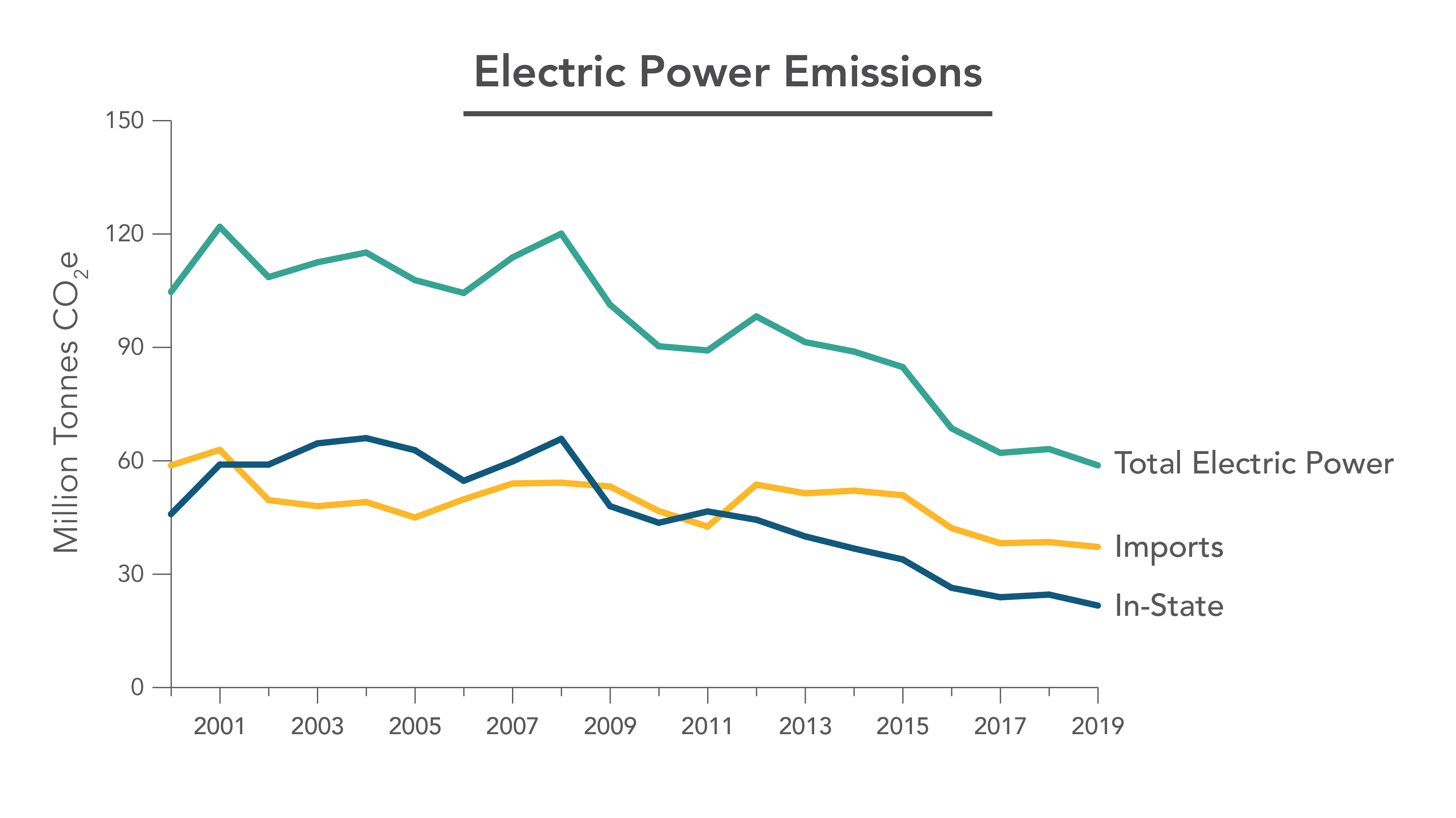 California will require much deeper GHG emissions reductions to reach its 2030 target of 40 percent below 1990 levels, and carbon neutrality no later than 2045, or sooner. At the Governor’s request, CARB will evaluate pathways for the state to achieve carbon neutrality by 2035, including strategies to reduce fossil fuel demand and supply and phase out extraction in the state, while the Public Utilities Commission will work to establish a more ambitious greenhouse gas emissions planning target for utilities. Governor Newsom also has directed the Department of Conservation’s Geologic Energy Management Division to initiate the rulemaking process to halt the issuance of new hydrologic fracking permits by 2024, and requested that CARB analyze pathways to phase out oil extraction across the state by no later than 2045.

Following the direction of SB 32, many of the key programs that helped achieve the 2020 target early doubled in stringency beginning this year. Starting in 2021 the Renewables Portfolio Standard increased from 33 percent renewable electricity in 2020 to 60 percent by 2030. The Low Carbon Fuel Standard increased the reduction of the carbon-intensity of vehicle fuels from 10 percent in 2020 to 20 percent by 2030. And the cap-and-trade regulation doubled in stringency from a 2 percent decline in available allowances each year to a 4 percent decline each year for this decade.

Additional existing and new programs will increase reductions further. These include rules to cut emissions from climate super pollutants such as methane and hydrofluorocarbon refrigerants. There are also new regulations to further push electrification to achieve 100 percent zero-emission passenger car sales in 2035 and 100 percent zero-emission trucks and big-rigs by 2045 in line with Governor Newsom’s Executive Order N-79-20. Additional regulations address diesel off-road and cargo-handling equipment used in ports and railyards. A new regulation under development is the first in the country to require the electrification of vehicles used by ride sharing companies such as Uber and Lyft. These on- and off-road programs — especially the rapid introduction of zero-emission trucks at ports and railyards — also will reduce air pollutants and air toxics that afflict the state’s most disadvantaged communities.

State agencies also are collaborating to develop programs in response to the Governor’s executive order on biodiversity and climate resilience, to restore California’s forests to their natural state as carbon sinks, while making plans to make better use of carbon storage in soil and croplands and protect biodiversity.

The Scoping Plan outlining the progress towards achieving the 2030 goal and a path to achieve carbon neutrality beyond that is currently in development. A draft will be available in the first quarter of 2022.