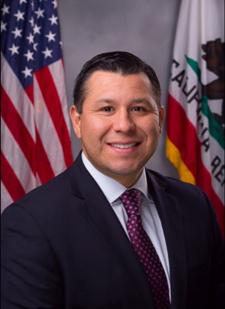 Assemblymember Eduardo Garcia represents California's 56th Assembly District, which includes cities and unincorporated communities in eastern Riverside County and Imperial County. This area has some of the highest unemployment rates in the state even with the presence of large agricultural and tourism industries. Elected in 2014, Assemblymember Garcia is the current chair of the Committee on Water, Parks, and Wildlife. He also serves on the Assembly Committees on Appropriations, Communications and Conveyance, Governmental Organization, and Utilities and Energy. He was named Chair of the Joint Committee on Climate Change Policies and on February 17, 2017 appointed to serve on the California Air Resources Board as an ex-officio member.

In his first term, Assemblymember Garcia was appointed to chair the Assembly Committee on Jobs, Economic Development, and the Economy. As chair, Assemblymember Garcia was responsible for leading the Assembly's review of policies and legislation related to small business development, international trade, and other state and local economic development related issues to help create a more robust and inclusive economy.

In 2016, Assemblymember Eduardo Garcia had well over two dozen bills and resolutions signed by Governor Brown. This triumph is significant for the 56th District as he is the first freshman legislator to accomplish this feat. Assemblymember Garcia made a point to champion measures that would increase access to healthcare, bring environmental and economic relief to the areas of the Coachella and Imperial Valley, such as the Salton Sea and New River, and also provide workforce training and financial assistance to small businesses in the district.

Included in this string of success were SB 32 and AB 197, the historic climate change package that established a landmark state emissions reduction mandate, boosted oversight and transparency of the California Air Resources Board while constructing the framework to ensure future climate policies prioritize investments into disadvantaged communities that are most affected by pollution.

A graduate of local public schools, Assemblymember Garcia attended Coachella Valley High School and the University of California, Riverside. He also completed the "Senior Executives in State and Local Government" Public Administration program from the John F. Kennedy School of Government at Harvard University and earned a master's degree from the University of Southern California School of Policy, Planning and Development.

He is a proud father, husband, and lifelong resident of the Coachella Valley.