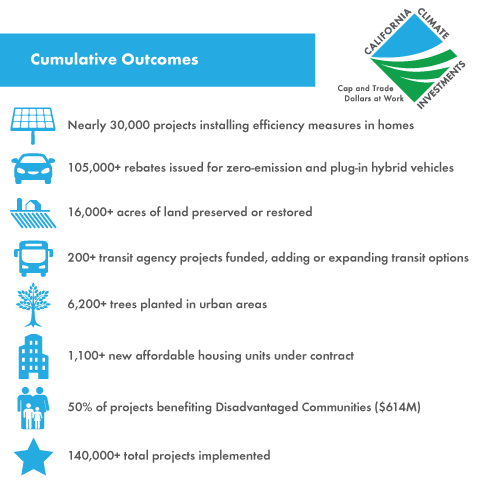 The report tracks the progress of the California Climate Investments, which awarded and implemented more than $500 million in new funding last year and more than doubled the number of projects statewide, spread over 57 of California’s 58 counties. The report was released today by the California Air Resources Board (CARB) and the California Department of Finance.

“The investment of cap-and-trade proceeds is reaching every corner of the State, cutting greenhouse gases and improving air quality – and quality of life – for millions of Californians, especially in the state’s hardest hit communities,” said CARB Chair Mary D. Nichols.

To date, $3.4 billion has been appropriated by the Legislature to 12 state agencies that have distributed $1.2 billion to projects that have been completed or are under way. Among the projects:

Designed to help California reach its climate goals, these investments are also providing an array of other benefits by creating jobs, improving air quality, and reducing transportation and energy costs. The report features profiles that highlight the impact these investments are having on individuals and communities, particularly those in California’s most disadvantaged communities.

Examples of these projects include:

Future reports will examine the benefits under AB 1550 (Gomez), which modifies the requirements for minimum investments to disadvantaged communities.

The report also found that projects are underway in 97 percent of the 2,000 census tracts in the state that the California Environmental Protection Agency designated as disadvantaged. And state agencies are actively seeking to make investment opportunities more accessible to disadvantaged communities through technical assistance grants and increased outreach.

Accompanying this year’s report is an interactive map that allows users to track where cap-and-trade funds are being invested anywhere in the state. Users can view the locations of individual projects and aggregate them by program and by the state’s 120 legislative districts and 58 counties.

Project level data for all projects included in the 2017 Annual Report and featured on the interactive map is available on the California Climate Investments website, including project locations, GHG reductions and benefits to disadvantaged communities.

The 2017 Annual Report to the Legislature on California Climate Investments Using Cap-and-Trade Auction Proceeds can be found here .