SACRAMENTO – Today, the California Air Resources Board voted to approve an updated plan for the South Coast Air Basin aimed at further cutting smog-forming emissions to attain the federal 8-hour ozone standard. The air quality plan is the most stringent in the nation.

Yet even with these rules in effect, sources of air pollution for which federal authorities have primary responsibility are expected to make meeting the federal standard more challenging. CARB analysis indicates that federal sources such as planes and trains will emit more smog-forming nitrogen oxides (NOx) emissions than any other mobile sources in the South Coast Air Basin by the end of the next decade.

“The plan approved today reflects more hard work by California air quality regulators to use all the tools and authority at our disposal to achieve emissions reductions needed to protect people in the South Coast who are exposed to unhealthful air,” CARB Chair Mary D. Nichols said. “But it is imperative that U.S. EPA move quickly to do its job and reduce pollution from the sources it has the responsibility to regulate.

“To meet the 80 parts per billion ozone standard in the South Coast, all levels of government must do their part,” Nichols added. “The updated plan serves as a call to action. California is prepared to coordinate with U.S. EPA on all efforts to focus on real actions to reduce emissions.” 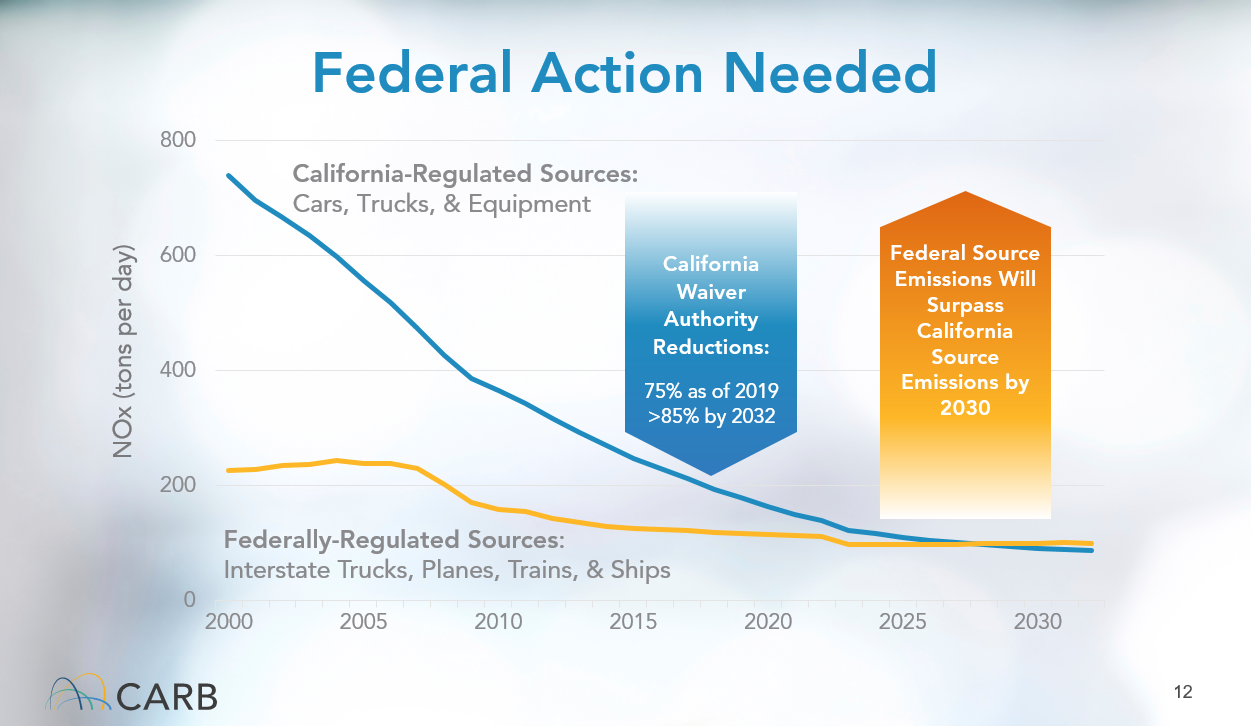 Much progress & more to do

The U.S. EPA first established the 80 parts per billion 8-hour ozone standard (80 ppb averaged over 8 hours) in 1997. Since then, CARB and the South Coast Air Quality Management District have together achieved NOx reductions of 900 tons per day. Sources under state control have been reduced by between 70 percent and 90 percent, while sources under federal jurisdiction have been reduced by only 16 percent, and some federal sources of emissions are growing.

While much progress has been made to clean up the air in the South Coast Air Basin – home to more than 17 million people in Los Angeles, San Bernardino, Orange, and Riverside counties – the air basin still has the worst smog in the country.

Among the innovations included in the updated plan are new controls on locomotives, off-road diesel engines, an expansion of incentive funding to accelerate the introduction of clean vehicles into California’s fleets, and additional air district controls. Combined, these measures will provide an additional 25 tons per day of NOx reductions that can be credited toward the 108 tons of NOx per day reduction that is still needed to attain the federal 8-hour ozone standard by 2023. The remaining reductions are reasonably available from further action at the federal level.

CARB estimates controls on these sources for which the federal government is primarily responsible could lower NOx emissions in the South Coast by more than 60 tons per day. Even while calling for more action by the federal government to reduce pollution, in taking its action today, CARB underscored that it will continue to use its authority to the fullest extent to achieve more reductions from pollution sources it regulates.