SACRAMENTO – The California Air Resources Board announced today that the pace of implementation for programs funded by California Climate Investments has picked up significantly. State agencies implemented $914 million in projects during the first six months of 2019, compared to $1.4 billion for all of 2018 and $720 million for all of 2017.

More than 20 state agencies are involved in program development, project selection, and implementation of 60 California Climate Investments programs that focus on reducing climate pollution and range from building affordable housing near transit to helping to protect communities from wildfires.

The first six months of the year saw a marked increase in implemented projects, with new investments in transportation, agriculture, and other sectors that decrease climate pollution and improve air quality in communities throughout the state. In total, California Climate Investments saw 32,700 new projects including 4,100 new affordable housing units under contract, and 40,000 new rebates for zero emission and plug-in hybrid vehicles.

And, in the wake of two of California’s worst fire seasons on record, California Climate Investments is helping to pay for nearly 70 forest-health and wildfire-prevention projects, including many forest-adjacent communities in the wildland-urban interface.

“Putting climate dollars to work faster is helping communities speed up the fight against air pollution and improve the quality of life in our most disadvantaged areas,” said CARB Chair Mary D. Nichols. 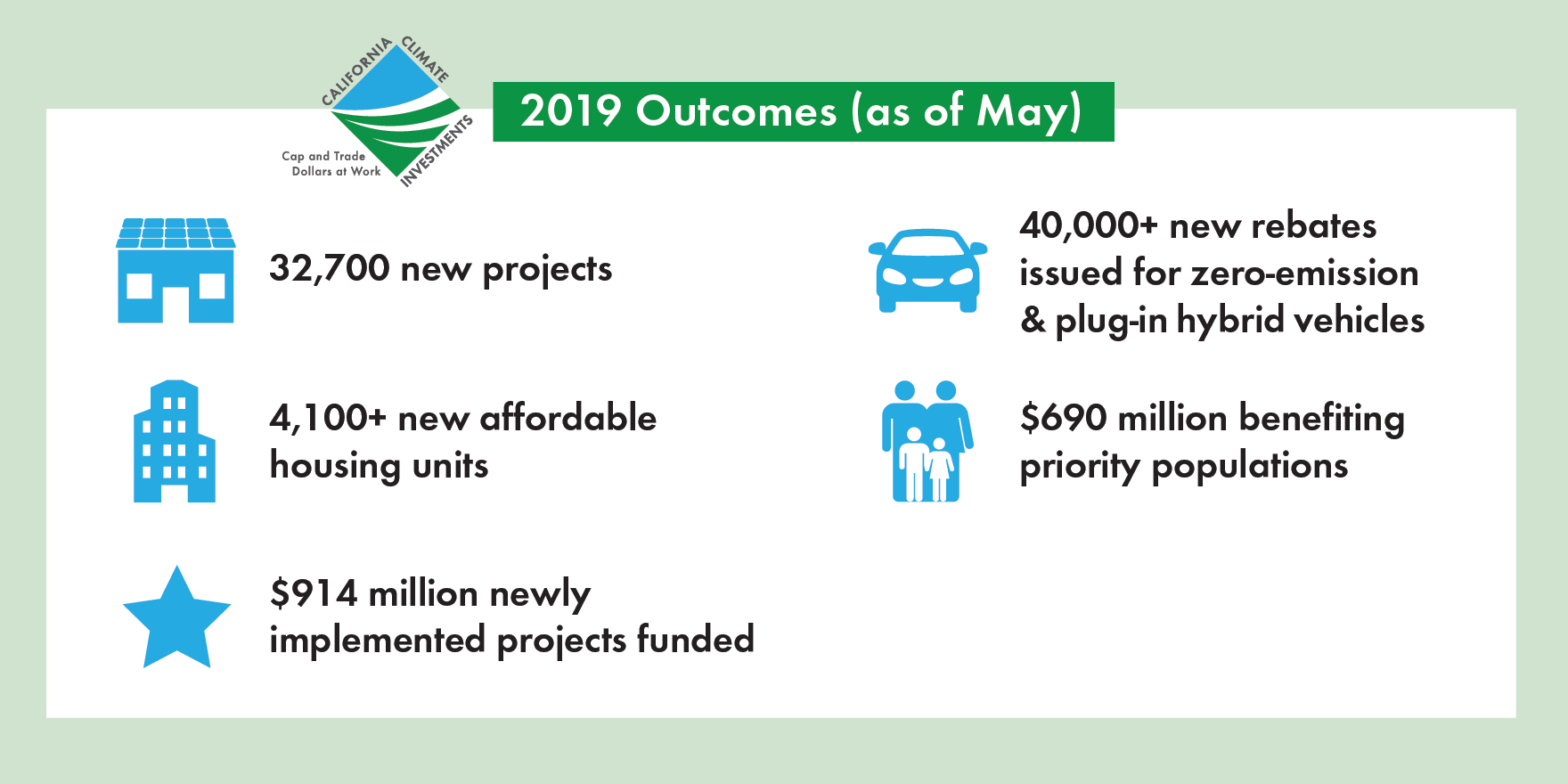 Recent investments in the agriculture sector include supporting improvements to farming practices to create healthier soils that can capture and store carbon and reduce fertilizer application. In addition, the FARMER program – administered by CARB – provides incentives to replace on-farm vehicles and equipment with cleaner, upgraded models.

Forests are also a focus of California Climate Investments, with nearly a billion dollars invested into improving the resilience and health of California’s forests, as well as providing support for CAL FIRE’s outreach, prescribed burning and other programs to help reduce the risk of catastrophic wildfires.

Proceeds from the state’s Cap-and-Trade carbon allowance auctions fund the California Climate Investments program. Once the Legislature appropriates funds, the administering agencies evaluate project types in their specific area of responsibility (housing, transportation, forest health, wildfire prevention) and design programs that further the state’s climate goals. The implementation stage begins when the funds are formally committed or delivered to those projects.

The administering agencies send reports to CARB at all stages of this process, and at the end of the year the Department of Finance delivers an annual report to the Legislature using those reported data.