“California’s extreme drought, heat waves, and wildfires make it quite clear we all must do what we can to steer away from the worst impacts of climate change,” said CARB Executive Officer Richard W. Corey. “California Climate Investments benefit our most environmentally impacted communities and help low-income Californians invest in green technology. They also help more Californians engage in the climate fight by driving cleaner cars and trucks that don’t rely on petroleum fuels, living in more energy-efficient homes and even planting trees to improve overall quality of life while reducing GHGs and air pollution.”

Since 2013, the Legislature has appropriated $15.4 billion in California Climate Investments funds for projects statewide, $9 billion of which are either underway or completed. Approximately $4.5 billion of all implemented funds directly benefit California’s priority populations, which include disadvantaged and low-income communities and low-income households statewide. California Climate Investments will provide about 70 million metric tons of GHG emissions reductions, the equivalent of taking 14 million cars off the road for a year. This does not include expected GHG emissions reductions attributable to the High-Speed Rail project. 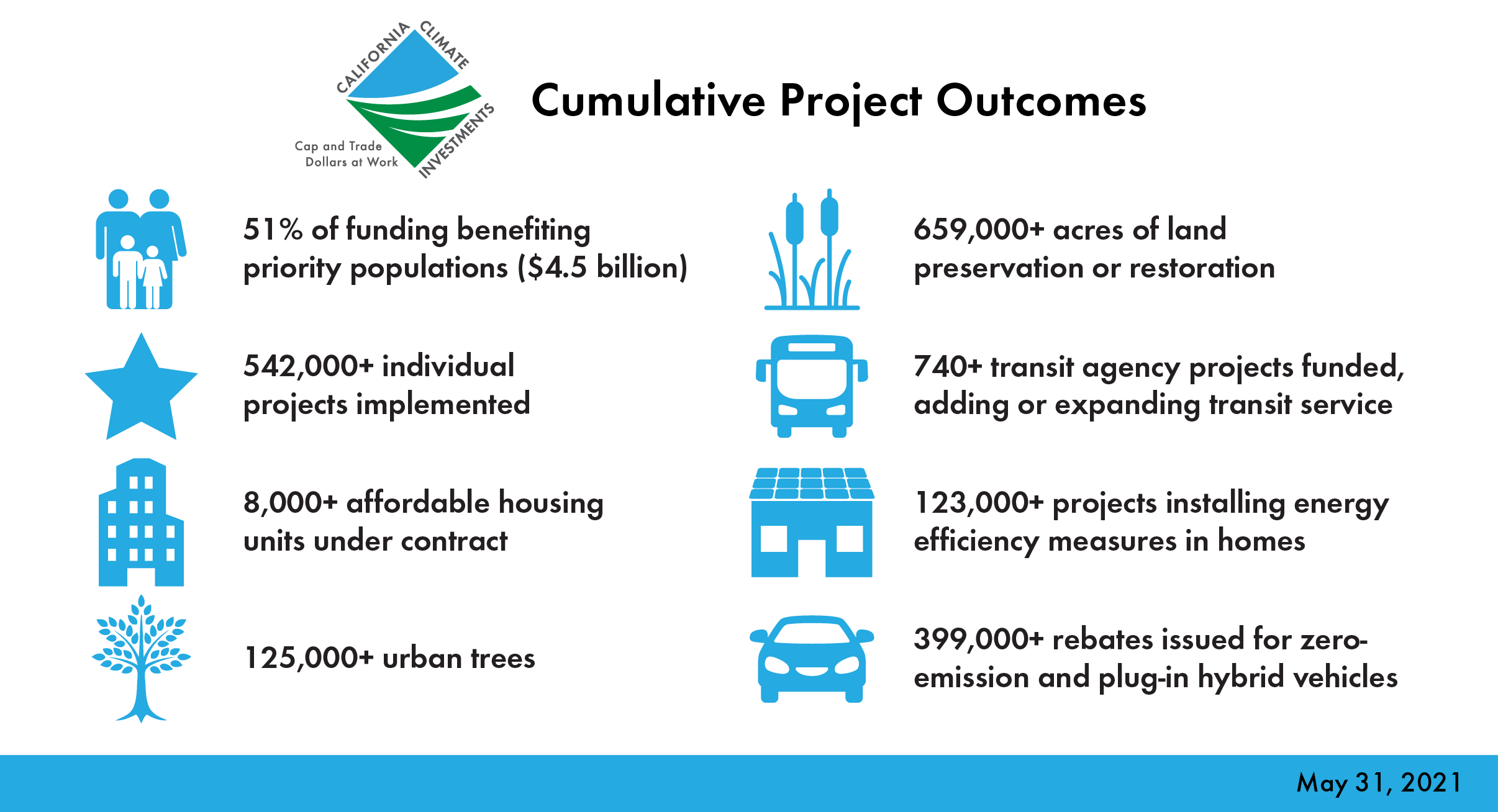 More than 20 state agencies manage investments in over 70 programs. New investments since December 2020 total 53,800 projects and will reduce greenhouse gas (GHG) emissions and promote a healthier California through these projects, including 51,000 rebates for the purchase of zero-emission vehicles and 697 affordable housing units.

In 2016, AB 1550 (2016) amended the investment minimums for disadvantaged communities created by SB 535 to require that a minimum percentage of projects be located within and provide a benefit to disadvantaged communities. AB 1550 also established new investment minimums for low-income communities and low-income households. To date, California Climate Investments is meeting and exceeding these minimum levels while providing more than a half-million projects in communities statewide.

California’s cap-and-trade program has raised $15.8 billion dollars since compliance began in 2013. The program requires an annual 4% reduction in GHG emissions from the state’s major electricity generators and industrial emitters of GHGs. These reductions apply to California’s 2030 goal of reducing GHGs 40% below 1990 levels by 2030.

The California Air Resources Board has released the 2021 California Climate Investments Mid-Year Data Update, which describes the progress of the program over time and provides highlights from the past six months. It includes estimates of GHG emission reductions and other project benefits.