The SR-15 Transportation Equity & Affordable Housing (TEAH) Task Force is a continuation of the multi-generational, resident-led SR-15 Visions campaign to advance transportation equity in City Heights, a historically underserved and disinvested community in San Diego. By convening frontline resident leaders, the SR-15 TEAH Task Force will build on this long-standing community vision that achieved the state's first freeway cover park and San Diego's first-in-line bus rapid transit stations. The SR-15 Task Force will engage the community in the next chapter of equitable and sustainable development for the SR-15 corridor, with a special focus on supporting the preservation and creation of affordable housing in this displacement vulnerable transit priority area. Local government will join the SR-15 TEAH Task Force in advisory and community listening roles and industry experts will train the Task Force, providing Task Force members direct access to city planners, transit agency staff, housing developers, and other subject matter experts. Ultimately, recommendations on development without displacement and specific local projects/policies will be vetted with the public at a series of fun and accessible community events. 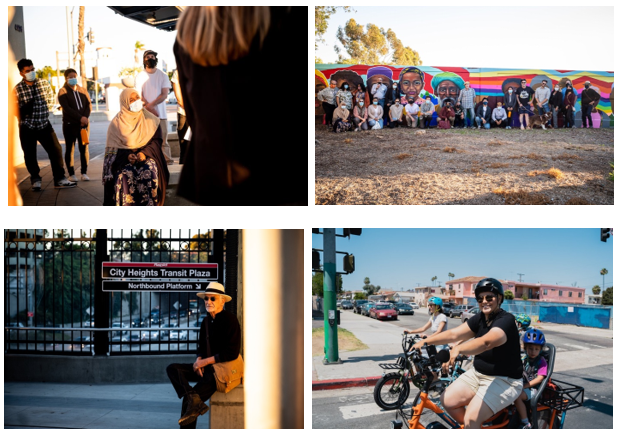 The Mid-City San Diego community is adjacent to the higher-income neighborhoods of Kensington and North Park. The population is a subset of the greater City Heights community with 18,907 residents. 100% of the community is in the low-income category and 65% is considered extremely low-income, spending 50 percent or more of their income on housing alone. 98% of the community are renters, and high rates of tenant-occupied housing plus low-income households point toward an increased vulnerability to displacement. 90% of the population identified as people of color and 77% of residents speak non-English languages. The largest group of residents (24%) are school-age children who typically walk or ride bikes to school. With 41% of households only owning one vehicle, 69% use that vehicle to drive alone to and from work, leaving other family members to either walk or use transit as their main source of transportation.

Demographics of Community Served by Project

The SR-15 TEAH Task Force centers community members' voice and will identify community priorities, plan community engagement, and make recommendations to agencies and decision-making bodies to influence and increase sustainable transportation equity and affordable housing, and anti-displacement strategies among residents and small businesses in the SR-15 area of City Heights. The Task Force aims to build capacity within its members to lead the planning process for future developments in the SR-15 area of City Heights. The goal is to convene community partners and community residents to influence and shape how their community’s development. Moreover, the work of the SR-15 TEAH Task Force through the Development Without Displacement will be used to inform the Mid-City Community Plan Update expected to take off between 2023 to 2024. 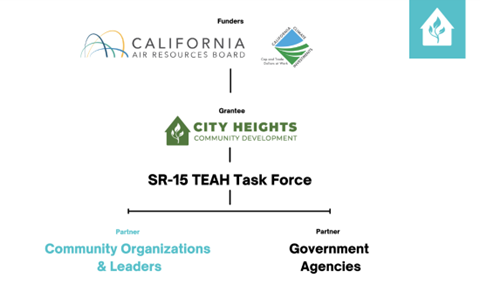 For 40 years, City Heights Community Development Corporation (CHCDC) has worked to enhance the quality of life in City Heights by working with the community to create and sustain quality affordable housing, livable neighborhoods, and economic self-sufficiency. CHCDC empowers the community to participate in transportation and planning initiatives to ensure that community-shaped plans are implemented. In addition to overseeing the overall project, CHCDC will facilitate the SR-15 TEAH Task Force meetings.