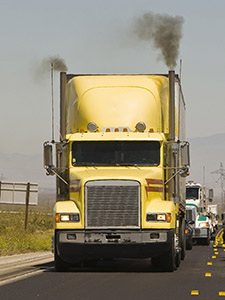 Diesel engines emit a complex mixture of air pollutants, including both gaseous and solid material.The solid material in diesel exhaust is known as diesel particulate matter (DPM). More than 90% of DPM is less than 1 µm in diameter (about 1/70th the diameter of a human hair), and thus is a subset of particulate matter less than 2.5 microns in diameter (PM2.5). Most PM2.5 derives from combustion, such as use of gasoline and diesel fuels by motor vehicles, burning of natural gas to generate electricity, and wood burning. PM2.5 is the size of ambient particulate matter air pollution most associated with adverse health effects of the air pollutants that have ambient air quality standards. These health effects include cardiovascular and respiratory hospitalizations, and premature death. As a California statewide average, DPM comprises about 8% of PM2.5 in outdoor air, although DPM levels vary regionally due to the non-uniform distribution of sources throughout the state.

DPM is typically composed of carbon particles (“soot”, also called black carbon, or BC) and numerous organic compounds, including over 40 known cancer-causing organic substances. Examples of these chemicals include polycyclic aromatic hydrocarbons, benzene, formaldehyde, acetaldehyde, acrolein, and 1,3-butadiene. Diesel exhaust also contains gaseous pollutants, including volatile organic compounds and oxides of nitrogen (NOx). NOx emissions from diesel engines are important because they can undergo chemical reactions in the atmosphere leading to formation of PM2.5 and ozone.

Most major sources of diesel emissions, such as ships, trains, and trucks operate in and around ports, rail yards, and heavily traveled roadways. These areas are often located near highly populated areas. Because of this, elevated DPM levels are mainly an urban problem, with large numbers of people exposed to higher DPM concentrations, resulting in greater health consequences compared to rural areas. A large fraction of personal exposure to DPM occurs during travel on roadways. Although Californians spend a relatively small proportion of their time in enclosed vehicles (about 7% for adults and teenagers, and 4% for children under 12), 30 to 55% of total daily DPM exposure typically occurs during the time people spend in motor vehicles.

The majority of DPM is small enough to be inhaled into the lungs. Most inhaled particles are subsequently exhaled, but some deposit on the lung surface. Although particles the size of DPM can deposit throughout the lung, the largest fraction deposits in the deepest regions of the lungs where the lung is most susceptible to injury.

In 1998, CARB identified DPM as a toxic air contaminant based on published evidence of a relationship between diesel exhaust exposure and lung cancer and other adverse health effects. In 2012, additional studies on the cancer-causing potential of diesel exhaust published since CARB’s determination led the International Agency for Research on Cancer (IARC, a division of the World Health Organization) to list diesel engine exhaust as “carcinogenic to humans”. This determination is based primarily on evidence from occupational studies that show a link between exposure to DPM and lung cancer induction, as well as death from lung cancer. Download the IARC report (external site).

Because it is part of PM2.5, DPM also contributes to the same non-cancer health effects as PM2.5 exposure. These effects include premature death, hospitalizations and emergency department visits for exacerbated chronic heart and lung disease, including asthma, increased respiratory symptoms, and decreased lung function in children. Several studies suggest that exposure to DPM may also facilitate development of new allergies. Those most vulnerable to non-cancer health effects are children whose lungs are still developing and the elderly who often have chronic health problems.

DPM has a significant impact on California’s population. It is estimated that about 70% of total known cancer risk related to air toxics in California is attributable to DPM. Based on 2012 estimates of statewide exposure, DPM is estimated to increase statewide cancer risk by 520 cancers per million residents exposed over a lifetime. Non-cancer health effects associated with exposure to DPM (based on 2014 - 2016 air quality data) are shown in the table below.

Trends in Outdoor Levels of DPM

The figure below shows the trend in ambient DPM. CARB regulations** of diesel engines and fuels have had a dramatic effect on DPM concentrations. Since 1990, DPM levels have decreased by 68%. The figure also shows which regulations have had the greatest impact on DPM.

DPM levels are expected to continue declining as additional controls are adopted, and the number of new technology diesel vehicles increases. 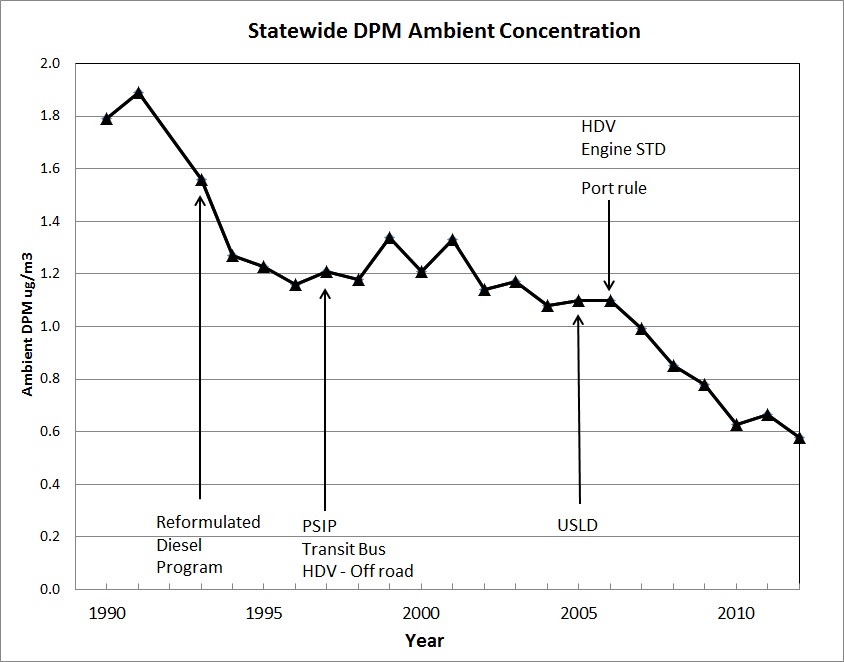 The figure below shows that despite the increased number of vehicle miles traveled by diesel vehicles (VMT, red line), and despite increases in statewide population (green line) and gross state product (GSP, a measure of growth in the state’s economy, light blue line), CARB’s regulatory programs still led to a decline in statewide cancer risk (dark blue line). 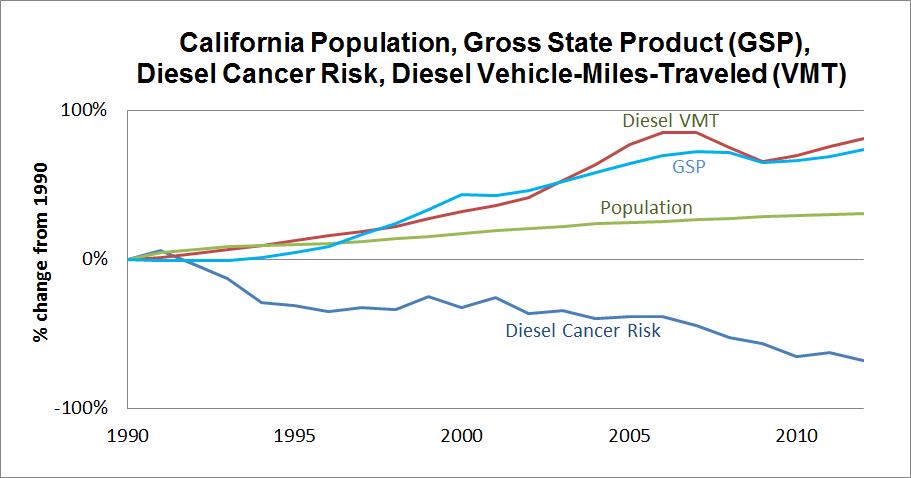 In addition to its health effects, diesel exhaust significantly contributes to haze that reduces visibility by obscuring outdoor views and decreasing the distance over which one can distinguish features across the landscape. Researchers have reported that in the San Joaquin Valley and in southern California, diesel engines contribute to a reduction in visibility. This decrease in visibility is caused by scattering and absorption of sunlight by particles and gases present in diesel emissions.

DPM also plays an important role in climate change. A large proportion of DPM is composed of BC. Recent studies cited in the Intergovernmental Panel on Climate Change report estimate that emissions of BC are the second largest contributor to global warming, after carbon dioxide emissions. Warming occurs when BC particles absorb sunlight, convert it into infrared (heat) radiation, and emit that radiation to the surrounding air. A recent California-specific study showed that the darkening of snow and ice by BC deposition is a major factor in the rapid disappearance of the Sierra Nevada snow packs. Melting of the snow pack of the Sierra Nevada earlier in the spring is one of the contributing factors to the serious decline in California’s water supply. As additional DPM controls are adopted, and the number of new technology diesel vehicles increases, BC emissions will continue to decline.

Although progress has been made over the past decade in reducing exposure to diesel exhaust, diesel exhaust still poses substantial risks to public health and the environment. Efforts to reduce DPM exposure through use of cleaner-burning diesel fuel, retrofitting engines with particle-trapping filters, introduction of new, advanced technologies that reduce particle emissions, and use of alternative fuels are approaches that are being explored and implemented. CARB anticipates that newly adopted diesel exhaust control measures will reduce population exposure even further, and that as the sustainable freight program expands, population exposure to diesel exhaust pollution will decrease even further. It is estimated that emissions of DPM in 2035 will be less than half those in 2010, further reducing statewide cancer risk and non-cancer health effects.