What is Particulate Matter?

Airborne particulate matter (PM) is not a single pollutant, but rather is a mixture of many chemical species. It is a complex mixture of solids and aerosols composed of small droplets of liquid, dry solid fragments, and solid cores with liquid coatings. Particles vary widely in size, shape and chemical composition, and may contain inorganic ions, metallic compounds, elemental carbon, organic compounds, and compounds from the earth’s crust. Particles are defined by their diameter for air quality regulatory purposes. Those with a diameter of 10 microns or less (PM10) are inhalable into the lungs and can induce adverse health effects. Fine particulate matter is defined as particles that are 2.5 microns or less in diameter (PM2.5). Therefore, PM2.5 comprises a portion of PM10.

What is the Difference Between PM10 and PM2.5?

PM10 and PM2.5 often derive from different emissions sources, and also have different chemical compositions. Emissions from combustion of gasoline, oil, diesel fuel or wood produce much of the PM2.5 pollution found in outdoor air, as well as a significant proportion of PM10. PM10 also includes dust from construction sites, landfills and agriculture, wildfires and brush/waste burning, industrial sources, wind-blown dust from open lands, pollen and fragments of bacteria.

PM may be either directly emitted from sources (primary particles) or formed in the atmosphere through chemical reactions of gases (secondary particles) such as sulfur dioxide (SO2), nitrogen oxides (NOX), and certain organic compounds. These organic compounds can be emitted by both natural sources, such as trees and vegetation, as well as from man-made (anthropogenic) sources, such as industrial processes and motor vehicle exhaust. The relative sizes of PM10 and PM2.5 particles are compared in the figure below. 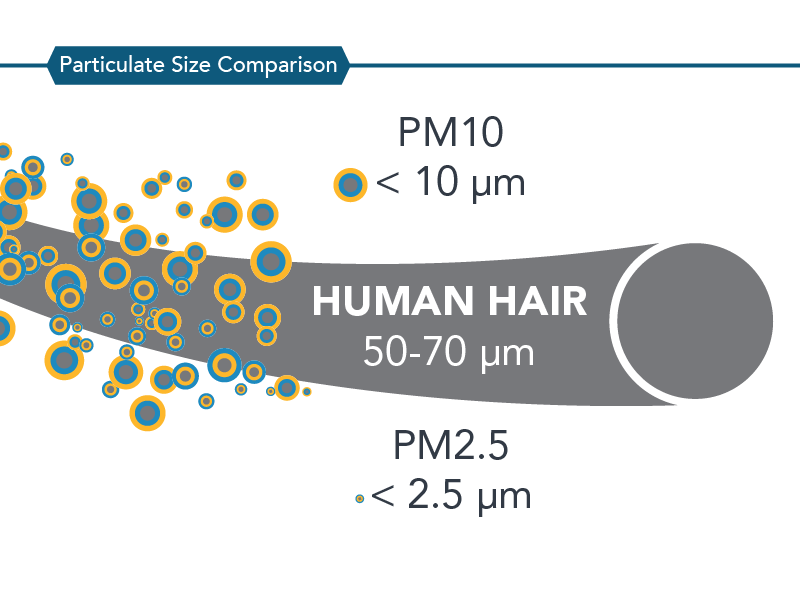 CARB is concerned about air-borne particles because of their effects on the health of Californians and the environment. Both PM2.5 and PM10 can be inhaled, with some depositing throughout the airways, though the locations of particle deposition in the lung depend on particle size. PM2.5 is more likely to travel into and deposit on the surface of the deeper parts of the lung, while PM10 is more likely to deposit on the surfaces of the larger airways of the upper region of the lung. Particles deposited on the lung surface can induce tissue damage, and lung inflammation.

What Kinds of Harmful Effects Can Particulate Matter Cause?

A number of adverse health impacts have been associated with exposure to both PM2.5 and PM10. For PM2.5, short-term exposures (up to 24-hours duration) have been associated with premature mortality, increased hospital admissions for heart or lung causes, acute and chronic bronchitis, asthma attacks, emergency room visits, respiratory symptoms, and restricted activity days. These adverse health effects have been reported primarily in infants, children, and older adults with preexisting heart or lung diseases. In addition, of all of the common air pollutants, PM2.5 is associated with the greatest proportion of adverse health effects related to air pollution, both in the United States and world-wide based on the World Health Organization’s Global Burden of Disease Project.

Short-term exposures to PM10 have been associated primarily with worsening of respiratory diseases, including asthma and chronic obstructive pulmonary disease (COPD), leading to hospitalization and emergency department visits.

Long-term (months to years) exposure to PM2.5 has been linked to premature death,  particularly in people who have chronic heart or lung diseases, and reduced lung function growth in children. The effects of long-term exposure to PM10 are less clear, although several studies suggest a link between long-term PM10 exposure and respiratory mortality. The International Agency for Research on Cancer (IARC) published a review in 2015 that concluded that particulate matter in outdoor air pollution causes lung cancer.

Who is at the Greatest Risk from Exposure to Particulate Matter?

Research points to older adults with chronic heart or lung disease, children and asthmatics as the groups most likely to experience adverse health effects with exposure to PM10 and PM2.5. Also, children and infants are susceptible to harm from inhaling pollutants such as PM because they inhale more air per pound of body weight than do adults - they breathe faster, spend more time outdoors and have smaller body sizes. In addition, children's immature immune systems may cause them to be more susceptible to PM than healthy adults.

CARB used the U.S. EPA’s risk assessment methodology to conduct an assessment of premature mortality associated with exposure to PM2.5 (California Air Resources Board 2010). An update to this analysis using ambient air quality data from 2014-2016 indicated that PM2.5 exposure contributes to 5,400 (uncertainty range of 4,200 – 6,700) premature deaths due to cardiopulmonary causes per year in California. In addition, PM2.5 contributes to about 2,800 hospitalizations for cardiovascular and respiratory diseases (uncertainty range 350 – 5,100), and about 6,700 emergency room visits for asthma (uncertainty range 4,200 – 9,300) each year in California.

How Does Particulate Matter Affect the Environment?

Particulate matter has been shown in many scientific studies to reduce visibility, and also to adversely affect climate, ecosystems and materials. PM, primarily PM2.5, affects visibility by altering the way light is absorbed and scattered in the atmosphere. With reference to climate change, some constituents of the ambient PM mixture promote climate warming (e.g., black carbon), while others have a cooling influence (e.g., nitrate and sulfate), and so ambient PM has both climate warming and cooling properties. PM can adversely affect ecosystems, including plants, soil and water through deposition of PM and its subsequent uptake by plants or its deposition into water where it can affect water quality and clarity. The metal and organic compounds in PM have the greatest potential to alter plant growth and yield. PM deposition on surfaces leads to soiling of materials.

Is Particulate Matter a Problem Indoors?

Some of the particulate matter found indoors originates from the outdoors, especially PM2.5. These particles enter indoor spaces through doors, windows, and “leakiness” in building structures. Particles can also originate from indoor sources. Particles of indoor origin include components derived from biological sources, many of which are known allergens, such as pollens, mold spores, dust mites and cockroaches. Indoor activities generate particles, as well, including smoking tobacco, cooking and burning wood, candles or incense. Particles also can form indoors from complex reactions of gaseous pollutants emitted from such sources as household cleaning products and air fresheners.

What are the Ambient Air Quality Standards for Particulate Matter?

Ambient air quality standards define the maximum amount of pollutant that can be present in outdoor air without harming human health. In 2002, after an extensive review of the scientific literature, the Board adopted a new annual average standard for PM2.5 ppm, and retained the existing annual and 24-hour standard average standards for PM10. The national annual average PM2.5 standard was most recently revised in 2012 following an exhaustive review of new literature pointed to evidence for increased risk of premature mortality at lower PM2.5 concentrations than the existing standard.  The 2012 review resulted in retention of the existing 24-hour average PM2.5 and PM10 standards.