The investment in a new stationary refrigeration system is one that has implications for many years to come. The changing regulatory framework adds to these considerations. Systems are designed for a specific refrigerant gas, and can be difficult and costly to modify.

Unfortunately, not all gases are created equal. The damage to the ozone layer (a thin shield high up in the sky that protects all life from the sun's harmful radiation) has required the phasing out of CFCs and now HCFCs such as R-22. However, many replacements such as HFCs still pose a threat to human health in terms of climate change. The potency of HFCs, when measured in terms of how they heat the atmosphere, is typically thousands of times greater than that of carbon dioxide (CO2) on a pound-for-pound basis (see graph, below). This potency is measured as Global Warming Potential, or GWP.

Refrigerant technologies are increasingly available that are much safer for the climate, and may also save energy. Incentives are available to assist in purchasing such environmentally preferable products: Learn more about incentives.

Be advised that common replacements for R-22, such as the HFC refrigerants R-404A, R-507A, and R-407B, have been identified for restrictions by both California and the U.S. EPA because of their high GWP values and the availability of alternatives with lower GWPs.

Businesses need to be informed to make the best choices when purchasing new systems.

What are the alternatives?

There are many alternatives to HFCs, depending on the application. Some of these have been in existence for over a century, called "natural refrigerants" because of their occurrence in nature, and are only now making a come-back due to the environmental problems with synthetic refrigerants. Examples include carbon dioxide (CO2), ammonia (NH3), water vapor, and hydrocarbons (HCs) such as propanes. New system types are emerging for specific applications. In addition a new group of low-GWP synthetic refrigerants, hydrofluoro-olefins (HFOs), are in development and already available for some applications.

The following graph illustrates the difference in global warming potential (GWP) of one pound of various common refrigerants, as compared to a pound of CO2: 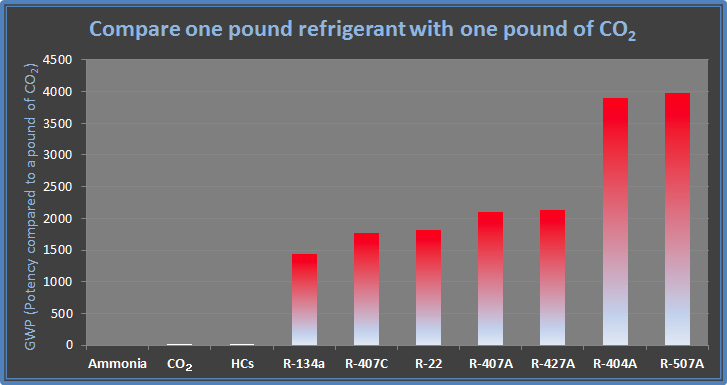 The above graph illustrates the difference in global warming potential (GWP) of one pound of each of various refrigerants, as compared with a pound of CO2.

Ammonia: Ammonia has the benefit of being energy efficient and having zero impact on both climate change and the ozone layer – unfortunately it is toxic to humans, historically limiting its applications. However, new technologies that reduce system size, safer controls and improved understanding of its application are expanding its potential. Low-charge ammonia systems are available today for a wide array of applications with favorable initial reports.

CO2: Carbon dioxide systems, particularly transcritical CO2 systems, are increasingly being used around the world, including in California. Most often used in supermarket applications in colder climates because of waste heat dissipation needs, in Europe, commercial carbon dioxide systems number in the thousands and North American market share is increasing rapidly. On both continents these systems are also making gains in southern climates.

Hydrocarbons: Hydrocarbon systems include R-290 (propane), R-1270 (propene or propylene) and R-600a (isobutane).  These refrigerants have very low GWPs and zero ozone depletion potential (ODP).  In addition they have been found to have substantial energy efficiency benefits as compared to HFCs in many applications. Because they are flammable, equipment must meet UL standards. Currently these systems are limited to small commercial units such as vending machines and standalone display cases, although a SNAP application is underway (2016) to allow larger sizes for self-contained water-cooled units in grocery stores, and a demonstration project has been installed which aim to provide whole-store solutions for commercial retail. Hydrocarbons have application in medium and low temperature applications for micro-distributed systems.

Hydrofluoroolefins (HFOs): HFOs have very low GWPs due to their very short atmospheric lifetimes. Although there are low-level flammability (A2L) issues with HFOs, some are already SNAP approved. For example, HFO-1234yf, with a 100-year GWP less than one (1) and similar operating properties to R-134a, is now approved for certain uses in some chillers. It is also a component of HFO-HFC blends such as R-448A and R-449A (GWPs close to 1,400) which were recently approved for retrofit of certain HFC systems. While these newly approved blends have lower GWPs than the HFC blends they replace, their use still requires great care and is already regulated under California law because they are still high-GWP refrigerants. Performance issues including energy efficiency are being evaluated. In addition, there are unresolved environmental concerns regarding HFO refrigerants such as regarding trifluoroacetic acid (TFA) buildup in water bodies. TFA is a strong acid that may accumulate on soil, on plants, and in aquatic ecosystems over time and that may have the potential to adversely impact plants, animals, and ecosystems (source: U.S. EPA, Federal Register Vol. 81, No. 74 / Monday, April 18, 2016 / Proposed Rules / p. 22861).

Whatever refrigerant is used, a hybrid/cascade system that cools a secondary refrigerant with low GWP can reduce GHG emissions by reducing the overall charge and leak rate needed for a given application. These systems can also be more energy efficient, reducing the "indirect" GHG emissions caused by the generation of the electricity used to power them. Such systems are available now for use in any climate zone.

Awards and Recognition: In California and nationwide, businesses with low-GWP systems and best practices in environmental stewardship gain special recognition, such as through Store Certification Awards from the U.S. EPA’s GreenChill Program as well as the Cool California Small Business Awards and other awards programs.

Here are some links to resources which may help your search for the best system choice for your application:

The RMP Program is currently managing an CARB research contract to analyze the energy use and climate change implications of alternative refrigerants in California for each regional climate. As mentioned above, some of the emerging technologies aren’t so new. Carbon dioxide was used as a refrigerant more than a century ago. It is about 1,800 times less harmful to the climate than R-22. CO2 refrigeration is already used extensively around the world, sometimes in hybrid systems, and performs as well as “Freon-type” refrigerants in all but the hottest desert climates. In extremely hot climates, energy costs may increase, which can reduce the climate change benefits of the low-GWP refrigerant depending on the energy source, the local temperature and mitigation features. At the same time opportunities for saving energy can exist such as reclamation of waste heat (e.g., to provide hot water).