SACRAMENTO – The California Air Resources Board today announced that greenhouse gas pollution in California fell below 1990 levels for the first time since emissions peaked in 2004—an achievement roughly equal to taking 12 million cars off the road or saving 6 billion gallons of gasoline a year.

“California set the toughest emissions targets in the nation, tracked progress and delivered results,” said Governor Edmund G. Brown Jr. “The next step is for California to cut emissions below 1990 levels by 2030 – a heroic and very ambitious goal.”

“In California we see the impacts of climate change all around us, but our efforts to curb its worst impacts are on track.  We are well positioned to meet the challenge of the 2030 target,” said CARB Chair Mary D. Nichols. “This is great news for the health of Californians, the state’s environment and its economy, even as we face the failure of our national leadership to address climate change.”

Senate Bill 32, signed in 2016, requires the state to go even further than AB 32 and cut emissions 40 percent below 1990 levels by 2030—the most ambitious carbon goal in North America.

The state’s annual emissions inventory helps keep the state accountable for meeting its emissions reduction targets. Highlights from the inventory published today include:

Electricity generation had the largest decline among the sectors. Emissions from this sector declined 18 percent in 2016, reflecting continued growth in renewable energy – such as solar, wind and geothermal – as a result of the state’s Renewables Portfolio Standard, and a corresponding drop in natural gas generation. Solar electricity in all forms, including rooftop generation, grew 33 percent, while natural gas fell more than 15 percent.

Thanks to the carbon price signal created by the Cap-and-Trade Program that makes fossil fuel generation more expensive, cleaner out-of-state electricity is increasingly taking the place of fuels such as coal. This included more imports of hydroelectric power from outside the state, which grew by nearly 39 percent in 2016 thanks to abundant rainfall throughout the West Coast.

“Emissions may vary from year-to-year depending on the weather and other factors,” said CARB Executive Officer Richard Corey. “However, this inventory demonstrates that our policies are working to incentivize GHG-free energy sources and ensure the state remains on track to meet its climate targets in 2020 and beyond.”

The transportation sector, the state’s largest source of greenhouse gases, saw a 2 percent increase in emissions in 2016 because of increased fuel consumption. But the state also saw cars and trucks use a record amount of biofuels – 1.5 billion gallons in all – as a result of the state’s Low Carbon Fuel Standard. These low-carbon alternative fuels, consisting mostly of biodiesel, renewable diesel, and ethanol, avoided 14 million metric tons of carbon dioxide from entering the atmosphere, compared to what would have happened if conventional fossil fuels had been used.

Emissions from the industrial sector – including refineries, oil and gas extraction, cement plants, and other stationary sources – fell 2 percent from 2015 levels, though emissions from refineries increased slightly. 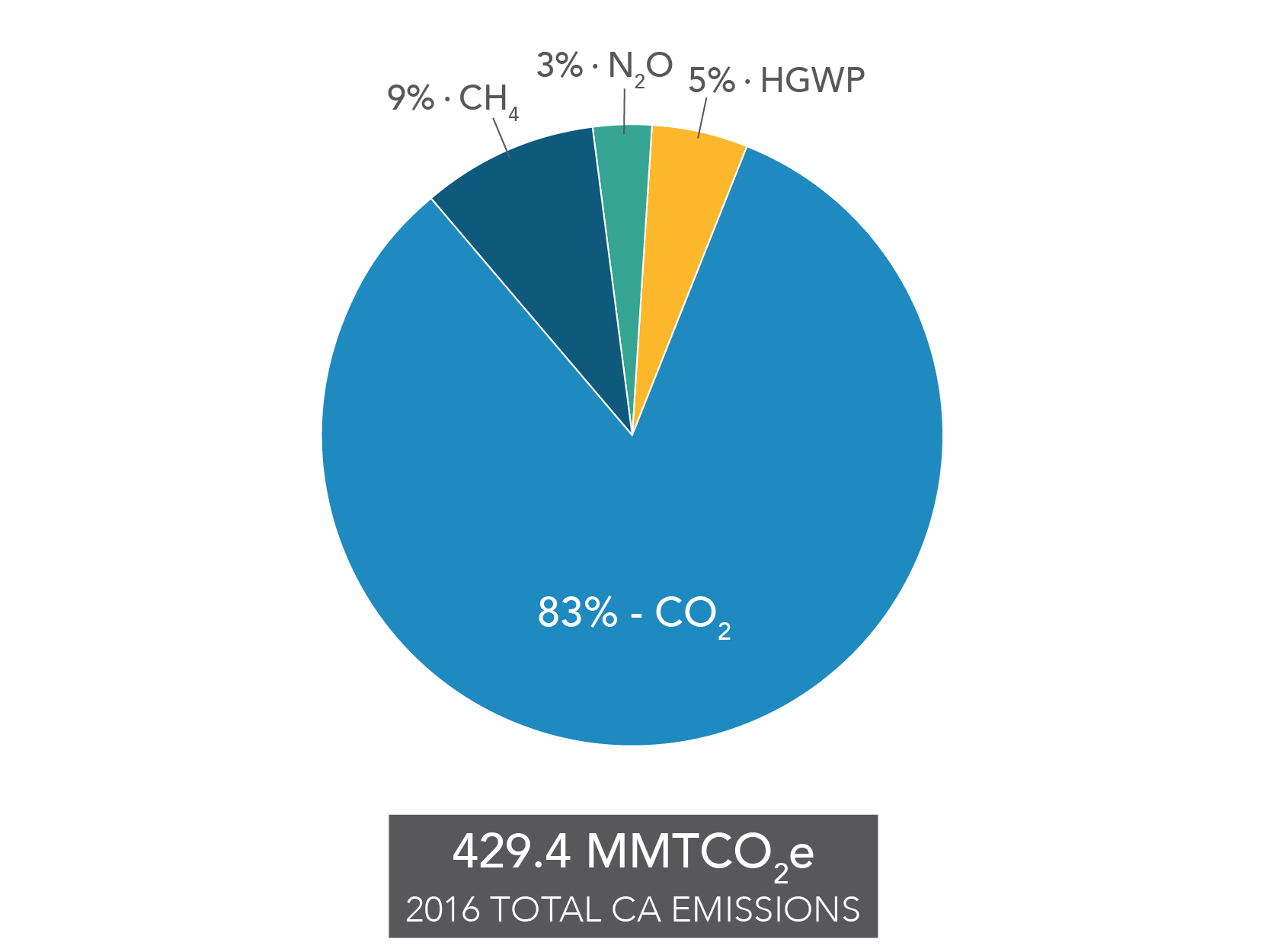 California’s primary programs for reducing greenhouse gases to 1990 levels by 2020 are the Renewables Portfolio Standard, the Advanced Clean Cars Program, the Low Carbon Fuel Standard and the Cap-and-Trade Program. Additional programs address a variety of greenhouse gas sources. These include the Short-Lived Climate Pollutants Strategy, the Sustainable Communities Strategy and the Sustainable Freight Action Plan.

The 2030 Scoping Plan, adopted by CARB last year, lays out how these initiatives work together to reduce greenhouse gases to achieve California’s 2030 target of 260 million metric tons and also to reduce smog-causing pollutants. This ambitious target will require California to more than double the rate at which it has been cutting climate-changing gases. Future reductions will occur against a backdrop of natural sources of GHGs which are increasingly variable because of the climate change California is already witnessing. Those variables include drought, reduced snowmelt runoff and larger and hotter wildfires, any one of which can affect the state’s energy balance and emissions levels.

How the Inventory is Compiled

The annual statewide GHG emissions inventory is compiled using many data sources. The primary source is data directly reported to CARB by the largest facilities and companies under the Cap-and-Trade Program. These reports are verified by a CARB-accredited third-party verification body.

CARB also relies on statistical data from various state and federal government agencies in developing the statewide inventory. These agencies include the California Board of Equalization, Energy Commission, Department of Food and Agriculture and CalRecycle, as well as the U.S. Environmental Protection Agency, Department of Energy, Department of Agriculture, and U.S. Geological Survey.

The latest data for this inventory is from 2016. This is because the process for verifying and validating required reporting of emissions from all facilities under the Cap-and-Trade Program takes more than a year, and additional data undergoes rigorous vetting by other government agencies.

The greenhouse gas emission numbers above are stated in million metric tons of carbon dioxide equivalent (CO2e).  Scientists use carbon dioxide as the benchmark in comparing the potency of heat-trapping effects among all greenhouse gases. Consistent with international and national greenhouse gas inventory practices, global warming potential in a 100-year timeframe is used in the inventory.