SACRAMENTO – Decades of clean air progress stand to be reversed if the U.S. EPA opts to repeal its rule on limiting production of “glider kits,” said Steve Cliff, Deputy Executive Officer of the California Air Resources Board, testifying at a public hearing today at EPA headquarters in Washington D.C.

A ‘glider kit’ is a new truck chassis and cab that includes a refurbished diesel engine and power train. In almost every case, these kits include much older so-called ‘pre-emission’ engines from 10, 15 and up to 20 years ago. These engines evade current diesel-powered truck tailpipe standards. As a result, compared to current clean trucks, they emit massive amounts of smog-forming pollution and toxic carcinogenic soot, directly impacting public health.

“If you enjoy driving behind a truck belching clouds of black carcinogenic smoke, you can thank EPA for putting many more of them on the roads, rather than cleaner modern models,” said CARB Chair Mary D. Nichols. “This illegal effort by EPA will open the floodgates to allow unlimited numbers of old and dirty trucks to pour onto our streets and highways masquerading as brand new clean trucks.”

The requirements for glider kits, set to go into effect in January 2018, were developed during three years of close coordination between CARB and the EPA.  The current EPA Administrator – who was not part of that process – now seeks to repeal the requirements, effectively eliminating any cap on the number of kits that can be manufactured within a given time frame.

Glider kits are legitimately used when compliant trucks are damaged leaving the chassis unusable but the engine intact. But recently some manufacturers have been abusing the glider provisions to build vehicles with no emission controls, and market them as new trucks.

Currently, some 10,000 ‘glider kits’ are sold each year, about one out of 20 heavy-duty (Class 7 and 8) tractor trucks sold. This is a vastly greater number than just a decade ago. Repealing the current caps on glider kit production would essentially allow an unfettered number of older, dirty engines onto the market. These trucks lack filters that trap toxic diesel soot and also lack controls that limit smog-forming nitrogen oxides.

Based on U.S. EPA’s own testing this year, glider vehicle levels of NOx (oxides of nitrogen, a precursor to smog) were 4 to 40 times higher than those of modern trucks. Levels of diesel particulate matter (a toxic air contaminant linked to cancer and a host of respiratory and cardiac ills including asthma) were 50-450 times higher. CARB’s own analysis confirms these figures.

According to Cliff, repealing the rule and allowing unlimited numbers of glider kits on the road will damage public health. CARB analysis determined that a single pre-emission engine in a new glider kit puts out the equivalent of up to 450 modern trucks (with engines from 2010 or later). 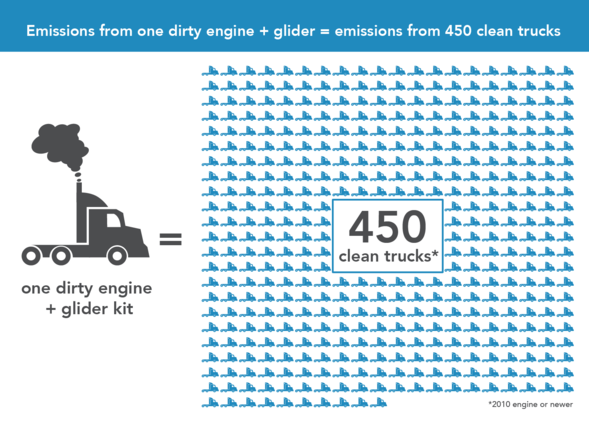 In fact, these glider kit trucks are so dirty that if they made up less than 7 percent of all medium- and heavy-duty trucks in California the pollution they emit would completely offset the clean-air benefits of California’s current efforts to clean up the state’s diesel trucks and buses. This puts Californians at risk, and would make it impossible for California to meet our federally mandated air quality standards.

Cliff also noted that allowing unlimited numbers of dirty glider kit trucks destroys the current regulatory level playing field for diesel truck manufacturers. “It has been a major undertaking on the part of U.S. manufacturers to integrate complex emission controls into their heavy-duty diesel engines,” he said in his testimony. “[They] have made significant financial investments and have structured their future product plans taking these investments and emission control commitments into account.”

Cliff added that “if EPA continues to shirk its duty to protect the public’s health and welfare and our nation’s air quality…[it] would put engine manufacturers that have invested significant resources to comply with current emission standards at a competitive disadvantage.”

Since 2000, California has led the nation and the world in developing strong programs to reduce air pollution from all diesel sources including ships, trucks, buses and passenger vehicles. Specifically, California’s Truck and Bus Regulation calls for all heavy-duty trucks to have 2010 or newer engines in place by 2023.